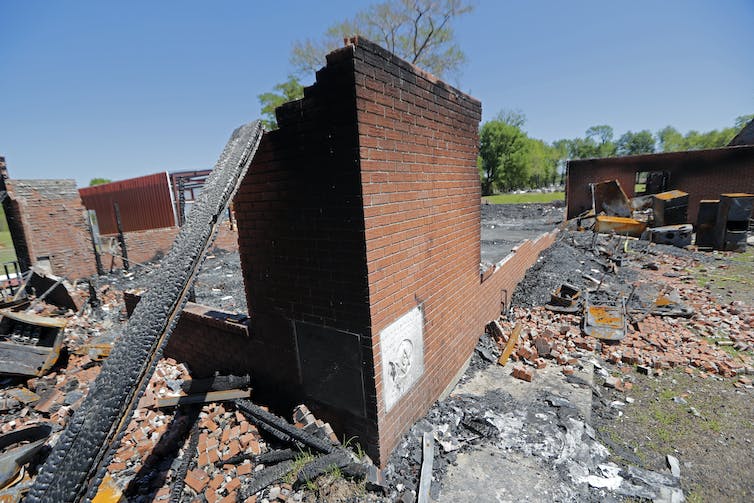 The burnt ruins of the St. Mary Baptist Church, one of three that recently burned down in Louisiana. AP Photo/Gerald Herbert

When three historically African American churches were burned down recently in southern Louisiana, it evoked memories of the violence of the civil rights era.

A 21-year-old white male, Holden Matthews, was later arrested on charges of arson. As media reports noted, Holden may have been influenced by a subgenre of heavy metal music – black metal. The Daily Beast reported that a Facebook page “that appeared to belong to Matthews showed he was active in pagan and black metal pages.”

The church burnings are still under investigation. But as a scholar who studies religion’s connection with several genres of popular music, including heavy metal, I know that a small subset of black metal came to be linked to sensational violence in its early days.

Heavy metal has its roots in the 1960s. To early bands and listeners it provided what musicologist Robert Walser called “a ‘harder’ sort of hard rock.”

The rock genre of metal distinguished itself from other genres through its dark worldly outlook. Many of its lyrics dealt with themes of demonology and death that contrasted with the popular music of the times.

Some early bands like Black Sabbath explored Satanic imagery in their songs and reveled in the controversy that they generated. Many parents were concerned that young listeners would be seduced into evil with such songs.

By the 1980s, metal as a genre had become commercially successful in Europe and North America. Around that time, other bands also emerged that believed metal should shock listeners rather than seek only commercial success.

One such band was England’s Venom. Scholar Titus Hjelm has argued that the band’s 1982 album “Black Metal” was the starting point of black metal as a subgenre.

The bands following Venom often combined extravagant theatricality, such as makeup and props like pentagrams or inverted crosses, with fiercely anti-Christian lyrics.

Among some black metal bands that sprang up in the mid-1980s, reliance on Satanic imagery was often replaced by an interest in alternate religious themes that were opposed to Christianity. These ideas took hold most deeply in Scandinavia.

Many of the younger Scandinavian black metal bands believed that the “purity” of their ancient Norse culture had been diluted by the influence of Judeo-Christian religions. Many of these musicians publicly embraced religions like Asatru, which worships the old Norse gods that predated the arrival of Christianity in Scandinavia. They professed admiration for Viking resistance to Christianization and for the strength of Norse deities like Thor.

Some bands also called for purging metal of the influences of American rock. What they emphasized was shifting to a purely European musical form that expressed their reverence for their culture.

But beyond aggressive song lyrics, there were no links to violence until this period.

In early 1990s, these ideas caught on with a small group of Norwegian musicians. These young men often gathered at Oslo’s record shop Helvete, meaning Hell, for conversation and music.

They were attracted to the ideas of self-reliance and personal strength found in the writings of 19th-century German philosopher Friedrich Nietzsche.

More importantly, as scholar Kennet Granholm writes, they embraced the idea that strength and nonconformity thrived in Scandinavia’s pre-Christian past, which “provided legitimacy both by being outside the mainstream and part of a perceived ‘authentic native culture.’” They began to contrast “heathen” culture with what they called the weak outsider religion of Christianity.

To demonstrate their idea of religious irreverence, the black metal bands emerging from this scene painted their faces to look like corpses, wore spiked gauntlets and bandoliers, and sometimes performed with animals’ blood onstage.

In the early 1990s, a small number of the musicians who regularly gathered at Helvete began plotting ways to demonstrate their desire to crush what they saw as weakness and impurity.

This took several forms, ranging from murder to grave desecration. One of these men, for example, murdered a homosexual man because the musician was revolted at being propositioned while walking in a park known to be a place where gay males met for sex.

Black metal’s opposition to Christianity also led to a series of church arsons. In various Norwegian cities in 1992, several black metal musicians burned eight separate churches, some many centuries old. Arsons continued in both Norway and Sweden through 1995.

Since this period of great violence and controversy, black metal continued to thrive in the form of multiple subgenres. It is important to note, however, that most black metal musicians and fans then and now criticized physical violence.

In the mid- to late-1990s, however, some black metal bands expressed the belief that fierce racist and anti-immigrant positions were integral to their music. Borrowing from Nazi ideology, a small number of Norwegian musicians believed that people of European descent should return to Aryan racial identity. These ideas found a home with a small but virulent subset of U.S. black metal bands and fans.

In time, such views led to the emergence of a small subgenre of black metal: national socialist black metal, the variant of black metal that most explicitly espoused racial separatism and extreme violence. In countries like Australia, Poland, Greece and the United States, National Socialist Black Metal has maintained a steady, if highly marginal, existence.

While most people involved in black metal rejected these views explicitly, the genre’s sometime emphasis on ethnic and cultural purity was interpreted by extremists as having a racial implication.

Many of these ideas were also be embraced by the American Nazi Party of the mid-20th century, which in turn had drawn on Odinism, an explicitly racist brand of Norse paganism begun by a Norwegian Nazi sympathizer.

Fun and cathartic for most fans 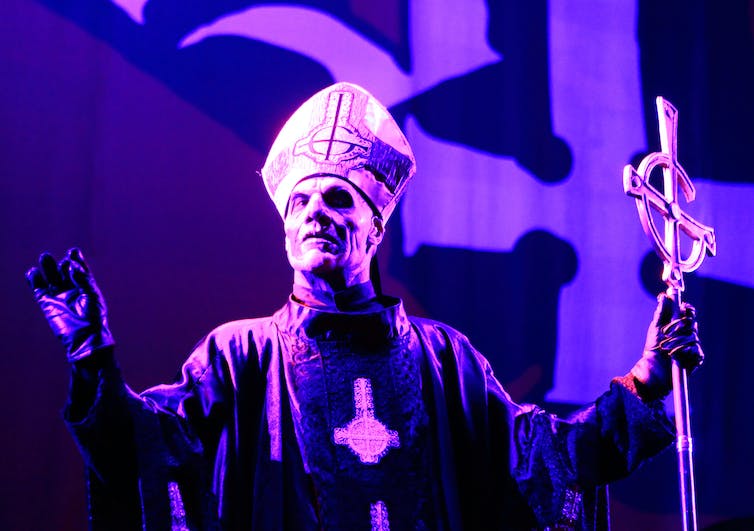 To be clear, heavy metal in general is as inclusive and nonviolent as the majority of rock genres. Some of the more aggressive variants of metal have actually been linked by psychologists to joyful attitudes.

And today, most fans of black metal enjoy the music in conventional ways, finding it fun and cathartic. There are also variants of black metal that promote environmental consciousness and even Christianity.