Gill Paul’s historical novels have reached the top of the USA Today, Toronto Globe & Mail and kindle charts, and been translated into twenty languages. They include two bestselling novels about the Romanovs –THE SECRET WIFE and THE LOST DAUGHTER. Her Titanicnovel WOMEN AND CHILDREN FIRST was shortlisted for the 2013 RNA Epic Novel of the Year award; NO PLACE FOR A LADY, set during the Crimean War, was shortlisted for a Love Stories award; and ANOTHER WOMAN’S HUSBAND tells of mysterious links between Wallis Simpson and Princess Diana. Gill also writes historical non-fiction, including A HISTORY OF MEDICINE IN 50 OBJECTS, and she speaks at libraries and literary festivals on subjects ranging from theTitanicto the Romanovs. Gill lives in London, where she is working on her tenth novel, and she swims year-round in a wild pond. 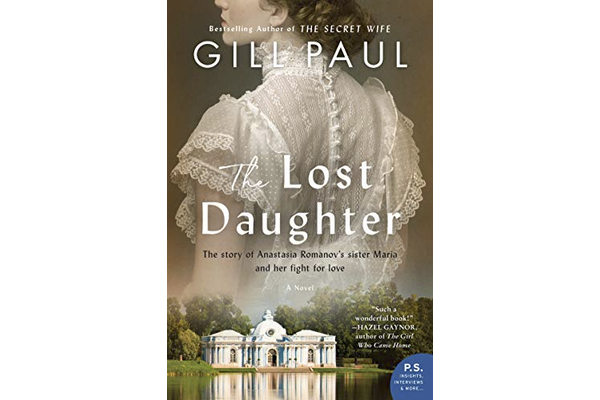 Biographers can report what happened to their subject and when; they can also suggest reasons why it happened. But only a novelist can climb inside the subject’s head and describe their innermost thoughts and insecurities. It’s in that secret place, hidden behind the bare facts of a life, that I like to write.

The recent trend for biographical novels about strong historical women has produced some cracking reads: Stephanie Dray and Laura Kamoie’s My Dear Hamilton, Stephanie Marie Thornton’s American Princess, and the works of Paula McLain, of which my favourite is The Paris Wife.  In the UK Hilary Mantel and Philippa Gregory are perennially popular with their insider stories of the Tudor and Stuart monarchies, and many other novelists have dipped their pens in the biographical inkwell. None of them is attempting to rewrite history – it is always clear they are writing fiction – but they want to go deeper than the history books allow.

The best novels about real people make us re-evaluate the subject and perhaps alter our preconceived ideas. Thomas Cromwell, for example, is softer and more human in Wolf Hall than he is usually portrayed. I tried to do this with Wallis Simpson in my novel Another Woman’s Husband. She’s had a bad press from biographers, who focus on her alleged affairs and rumours that she ensnared the Prince of Wales using special sexual techniques learned in Chinese brothels. I used a trope many novelists have adopted before me when I viewed her through the eyes of her lesser-known best friend. Mary Kirk met Wallis at summer camp when they were both fifteen and remained close right up to the abdication crisis, so she had a unique viewpoint. History has judged Wallis for the effect she had on the British monarchy; I judged her for the way she treated her schoolfriend.

There are loads of dangers and pitfalls for novelists writing about real people, especially if their story is within living memory and already well known. When you are attributing made-up thoughts and dialogue, perhaps adding a few tics and quirks, there will always be some who object: “He/she would never have done that/said that.” I’m sure Joyce Carol Oates received a few such comments when she dared to write her brilliant novel Blonde, about Marilyn Monroe.

Do novelists need to tell the truth about real people? I don’t think so. Personally, I try to stick closely to the historical facts, not because I feel an obligation to do so, but because I am curious to reach a version of the character that feels emotionally true, with enough authentic detail to be convincing for readers. I will omit facts that don’t contribute to the story and might play around with the timeline, but I always include a historical afterword where I confess what was made up, and credit the sources I used. But if a novelist chooses to reinvent someone entirely – for example, making Abraham Lincoln a vampire, or letting Hitler win the Second World War – that can also make a good novel.

The libel laws (tougher in the UK than the US) can put the brakes on creative imagination. You can’t libel the dead, but you need to be super careful about the living, even if they’re only subsidiary characters. I thought all the protagonists were dead when I wrote The Affair, which takes place as Elizabeth Taylor and Richard Burton fall in love during the making of Cleopatra in Rome in 1962, so I was alarmed to receive a post-publication email from the wife of the director, Joe Mankiewicz. I had covered the story of the beginning of her relationship with Joe in the novel. Fortunately she approved of my version; it could have been awkward (and expensive) if she hadn’t.

How do you step into the shoes of a historical character? First, I go back to primary sources and start with their own writings, if any survive. In my latest novel, The Lost Daughter, I write from the point of view of Maria, middle child of Nicholas II, the last tsar of Russia. Her letters and diaries (translated from Russian by Helen Azar) don’t give much away but memoirs by the family’s tutors are more productive, and the hundreds of photographs and home movies the family shot (available online) are revealing.

I had to be careful not to view Maria from a 21st century perspective. One of the most important things about the Romanovs was their devotion to the Orthodox religion; another was their love of the mother country, which may have stopped them trying to escape. Since I am neither Russian nor Orthodox, and wasn’t born royal, this required a leap of imagination.

After primary sources, I read the most highly acclaimed history books. Some historians disapprove of fictionalizations produced by novelists, who are seen as piggybacking on their original research. “Why write novels about the Romanovs when the truth is so compelling?” one historian asked me. My answer is that we have different jobs. The historian’s job is to present all possible interpretations of events in an even-handed and accurate way, set against the greater picture of the era; novelists get to pick sides, to have opinions about their characters, to narrow the focus and manipulate the facts in order to create a great story.

When writing about real people, I always hope I’ve done them justice – but that’s not the primary objective. The main obligation of the historical novelist is to write an entertaining novel that readers want to read. Apart from that, and the libel laws, there are no other hard-and-fast ‘rules’.