Anarchism and the Avant-Garde: Félix Fénéon at the Museum of Modern Art

Sam Ben-Meir is a professor of philosophy and world religions at Mercy College in New York City. 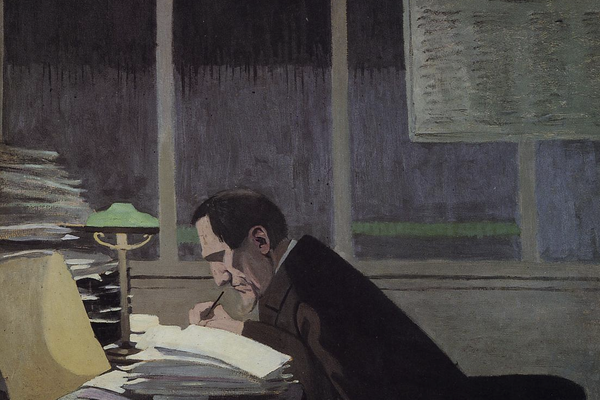 The Museum of Modern Art is currently presenting Félix Fénéon: The Anarchist and the Avant-Garde – From Signac to Matisse and Beyond, examining the immense influence of this art critic, editor, publisher, collector and anarchist. Fénéon (1861-1944) saw the critic as a channel between the artist and the public – a role which had particular significance because art could further the cause of social justice and harmony. As Paul Signac would proclaim: “Justice in sociology, harmony in art: same thing.”

The exhibition includes several of Georges Seurat’s paintings, and begins with a study for “A Sunday on La Grande Jatte” (1884), his famed masterpiece, which was featured in its ultimate, monumental (10-foot wide) iteration at the 1886 exhibition of the Impressionists. That same year Fénéon would coin the term Neo-Impressionism to identify the revolutionary innovations that Seurat and Paul Signac were pioneering – which included the pointillist technique that Fénéon would contrast with the ‘blink-of-an-eye’ effects of the Impressionists. For Seurat and Signac, pointillism was a science-based approach to color, based on the application of tiny, juxtaposed dots of multi-colored paint, which were blended in the viewers eye, rather than physically blended on the canvas.

The show includes paintings by Maximilien Luce, such as “Man Washing” (1887) which depicts a man standing over a wash basin, as he cleans the back of his neck. The scene underscores the simple, daily routines of the working-class and their humble, domestic interiors: a small mirror hangs on the wall behind him; his jacket lies draped over a chair, which casts its shadow over his black boots and the hexagonal terracotta tiles of the floor. There is a tough, primitive ruddiness to Luce’s representations of the working-class, a quiet dignity in the subject’s thin but taut, muscular frame.

Luce was a fellow anarchist with whom Fénéon would form a close friendship. A spate of political bombings in 1894 would lead to the so-called Trial of the Thirty; and while Fénéon was ultimately (and narrowly) acquitted, both men would find themselves at Mazas prison – a notorious, twelve-hundred cell panopticon. A lithograph by Luce depicts Fénéon at Mazas, standing within a long, narrow outdoor corridor, flanked by a looming guard tower which could see into every cell. 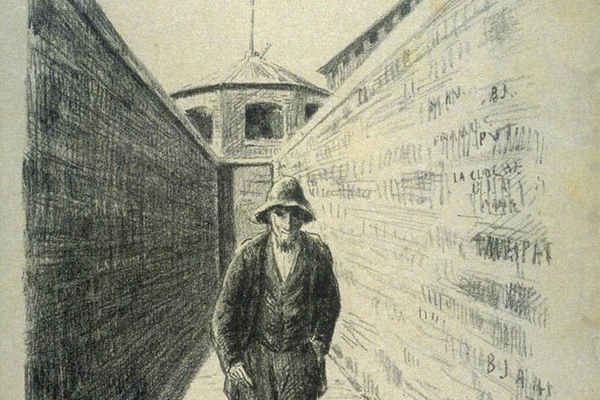 One of the exhibition’s standout paintings is Signac’s “Demolition Worker” (1897-99) – a monumental allegory about delivering the “forceful blow of a pickaxe to the antiquated social structure.” One is reminded of Mikhail Bakunin’s famous dictum “the passion for destruction is a creative passion too.” But the painting is more than a plea for bringing down the present social order: it is an anarchist’s call to take up the struggle for a modern, egalitarian society in which manual laborers are treated with fairness and respect – a testimony to the inherent nobility of man and of the human form. 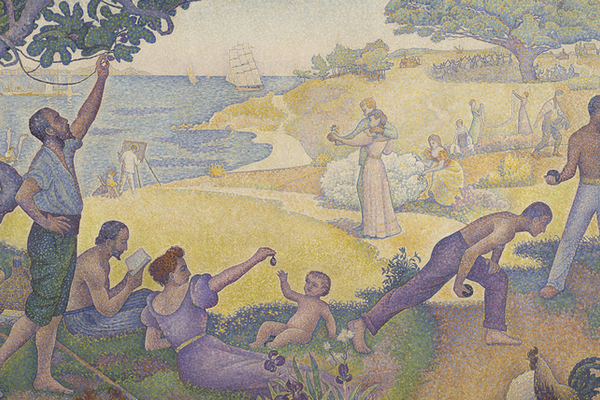 “In the Time of Harmony: The Golden Age Has Not Passed, It Is Still to Come”, Paul Signac, 1896

“In the Time of Harmony: The Golden Age Has Not Passed, It Is Still to Come” (1896), is meant to offer a glimpse of Signac’s utopian vision, his dream of what the future society might look like. Anarchism was not about the fury of political violence for its own sake, nor was it about dismantling social structures so that lawlessness and chaos might prevail. In Kropotkin’s words anarchism was about “well-being for all” – and “well-being for all is not a dream. It is possible, realizable, owing to all that our ancestors have done to increase our powers of production.” The Neo-Impressionists recognized that well-being also meant the liberation of our aesthetic sensibilities, and the realization of our true self through the freedom to create and recreate. As Signac would observe: “When the society we dream of exists, the workers freed from the exploiters who brutalize them, we will have time to think and to learn.” Signac’s figures dance, paint, exercise and read; they bathe and recline, they sing and play. Men, women, and children are all a part of Signac’s paean to a world in which social disparities are overcome, and positive freedom – the freedom to, as opposed to mere freedom from – is finally our guide.

The social theory of the Neo-Impressionists was a combination of anarchism and communism; and was chiefly inspired by the writings of Russian exile Pierre Kropotkin, as well as the work of Jean Grave and the Belgian geographer Elisée Reclus. They agreed with socialists in their vision of economic communism and equality of social conditions – including collective ownership of the means of production, the abolition of private property, and the dissolution of class hierarchies. A crucial feature of anarchism is the emphasis on the individual as the fundamental building block, the essential point of departure for any human association whatever. The individual was characterized by Grave in 1899 as a social creature who should be “left free to attach himself according to his tendencies, his affinities, free to seek out those with him whom his liberty and aptitudes can agree.” What the anarchists yearned for was a harmonious relationship between the individual and society as a whole – and this social ideal found its aesthetic representation in Neo-Impressionism. As D.D. Egbert observed in Social Radicalism and the Arts (1970): “… The very technique that the Neo-Impressionists employed, with its strongly accentuated individual brush strokes, which nonetheless are brought together in harmony to form the picture as a whole, paralleled the individualistic yet communal spirit of communist-anarchism.”

It is notable that in general, the Neo-Impressionists rejected overtly political subject matter – “stylistically innovative art, by its very freedom from convention, was necessarily revolutionizing.” They saw no need to embrace proletarian subject matter or anything like the ‘social realism’ which would characterize visual art during the Soviet era. As Pissarro observed in 1895: “Every production which is truly a work of art is socialist (whether or not the creator wishes it) … This work of pure beauty will enlarge the people’s aesthetic conceptions.” The fundamental idea here is that aesthetic form itself is the bearer of art’s radical potentialities, and beauty is inherently a kind of protest against an unfree world.

The show includes a number of works by the still underappreciated Félix Vallotton, including “Félix Fénéon at La Revue blanche” (1896) – a painting of Fénéon hunched over his desk, working assiduously late into the night, illumined by the glow of an electric lamp. It is a portrait of dedication – the image is reduced to its essentials, and intentionally slight on details to avoid distracting us from the portrait’s central theme. In other words, the concentrated focus of Vallotton’s subject is reproduced in the formal qualities of the painting, by eliminating everything extraneous to the image of a man wholly committed to his work.

In 1906, Fénéon joined the prominent art gallery Bernheim-Jeune, owned by Gaston and Josse Bernheim, two brothers who inherited their father’s business in the early years of the twentieth century. They are depicted in a 1920 painting by Pierre Bonnard, one of the Post-Impressionist, avant-garde artists to whom Fénéon gave his unflagging support. Fénéon also signed contracts with Kees van Dongen and Henri Matisse. Struck to see a well-known anarchist installed at an established and fairly conservative gallery, one contemporary observed that “A good anarchist, [Fénéon] planted Matisses among the bourgeoisie from the back room of Bernheim-Jeune as he might have planted bombs.” The comparison is a telling one because it underscores that, for Fénéon, all genuine art was necessarily subversive, an “indictment of the established reality” (as the philosopher and critical theorist Herbert Marcuse would later put it) – and by championing modern art he was, in his way, serving the cause of social revolution. 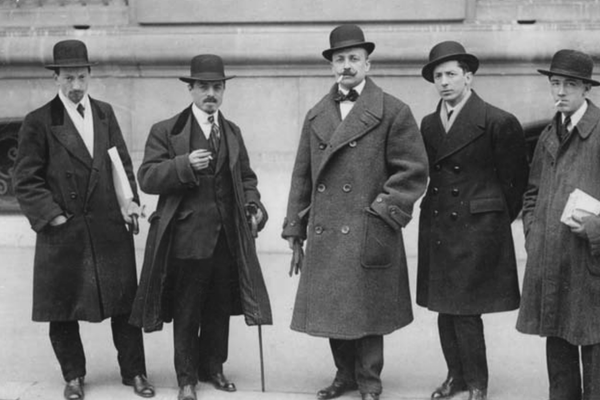 One of the most notable exhibitions that Fénéon organized was that of the Italian Futurists in February 1912 – which included paintings by Umberto Boccioni, Giacomo Balla, Gino Severini, Luigi Russolo, and Carla Carrà, among others. Emphasizing speed, technology, political radicalism and violence, Fénéon’s exhibition served to propel the Futurists to the front ranks of the European avant-garde. Boccioni was the first artist to be associated with the movement – and the show includes his painting “La risata” (1911, The Laugh), regarded as his first indisputably Futurist work, and an expression of the artist in his full maturity. From the gaudy, theatrical woman smiling in the upper left-hand corner, to the conspicuous men on the far left and right sides of the painting, to the many other faces and objects that have been worked in, Boccioni presents us with what is at once a simple dinner party, and at the same time a multi-dimensional conjunction of people and things, a fragmented reality, quasi-cubist, semi-abstract and inexhaustible in the relationships it conjures.

The sampling of Futurists includes Carrà’s painting memorializing the “Funeral of the Anarchist Galli” (1910-11), who was killed by police during a strike in Milan in 1904. The funeral itself became violent when the police refused to let mourners enter the cemetery, and Carrà’s painting captures the chaotic scene with sharp, slashing lines, aggressive brushwork and intense shades of red.

Félix Fénéon was not an artist, but an art critic; a bridge as it were between the artist and the public – and yet he was also so much more, because he recognized his significant social responsibility to find and champion those artists that were worthy of the public’s attention. That is perhaps the most important duty of the critic, and also the most difficult of the critic’s tasks; as it is in the very nature of genius to elude us, to transgress our settled categories of comprehension; and this is most true of the avant-garde artist who defies convention, who creates in effect a new vocabulary of seeing, and in the process reshapes and redefines our aesthetic sensibilities, our understanding of what is beautiful, and what the very aim of art is or should be. Fénéon’s influence was immense and due, in no small part, to his eye for genius; and because he recognized that while a painting may not, in itself, start a revolution, it can transform the way we see the world – and that is the beginning of all meaningful change.