Ukraine Evokes Past "Eve of Destruction"

Richard Aquila is a professor emeritus of history at Penn State University, the Behrend College and a Distinguished Lecturer of the Organization of American Historians. A specialist in U.S. history and former host of NPR’s Rock & Roll America, his latest book is Rock & Roll in Kennedy's America: A Cultural History of the Early 1960s (forthcoming in 2022 from Johns Hopkins University Press). 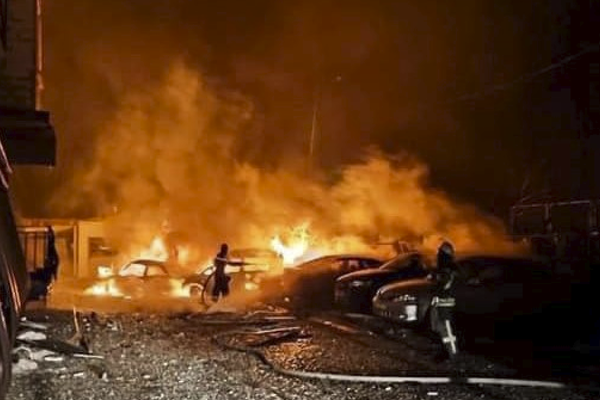 A folk-rock song from long ago has been haunting me for weeks. In 1965, Barry McGuire scored a number 1 hit with the chilling “Eve of Destruction.” As the Vietnam War escalated and the civil rights movement devolved into violence, McGuire’s apocalyptic record shot up the pop charts. The musical broadside blasted American politics, militarism, racism, and hypocrisy, as well as violence worldwide. “Even the Jordan River has bodies floatin’,” lamented the raspy-voiced McGuire. “If the button is pushed, there's no running away. There'll be no one to save with the world in a grave.”

The ominous song became part of a generation’s collective memory. Fifty-seven years later, we once again find ourselves on the eve of destruction. While the Ukraine War and Russian atrocities escalate, nuclear war clouds gather on the horizon. Still, there is a glimmer of hope that peace will break out. Putin’s “special military operation” has not turned out as planned. Rather than achieving a quick victory and glory for Mother Russia, the invading forces wound up in a quagmire.

Putin has only a few options left, all bad. He could unleash more troops, tanks, planes, and rockets, but at best that would result in a Pyrrhic victory. The rising body counts of Russian soldiers and the horrendous attacks on civilians are damaging Russia’s image at home and abroad. Every day brings new humiliations and evidence of war crimes. The invaders look brutal yet inept. Their weapons and equipment appear inferior, while strategic thinking and supplies are lacking. The Russian army – once feared – is now being mocked by their Ukrainian foes and the world in general.

If the Russian war machine continues to misfire, Putin and his generals might be tempted to use chemical or even nuclear bombs to end the war quickly and decisively. But, the use of such horrific weapons would be an act of self-destruction. Very likely, Putin, his regime, and perhaps Russia itself would pay the ultimate price.

Escalating or even just continuing the Ukraine War would be futile. Ukrainians are determined to fight back, while the United States and its allies are united in their determination to stop Russian aggression.

As casualties mount and economic sanctions pound the Russian economy, cracks are beginning to appear in Russia’s support for the war. Growing evidence suggests the Russian people are reeling from less access to western banking, technology, and consumer goods, including the products and services provided by global companies such as General Electric and Apple, not to mention McDonalds and Victoria’s Secret.

News that the war is not going well is now sinking in, causing Russians to speak out in unexpected ways. Anti-war protests continue to pop up. Academics and pundits have voiced anti-war sentiments on State-controlled media. Oligarchs have begun questioning the wisdom of Putin’s war. Even the Russian military is having second thoughts as the death count for generals and officers continues to rise and the morale of conscripts on the Ukrainian front plummets. Making matters worse, the flagship of Russia's Black Sea fleet just sunk due to Ukrainian missiles or Russian incompetence. Either way makes Russia look bad. With the situation worsening, unnamed Kremlin officials confided to Bloomberg News that Putin’s invasion was a “catastrophic” mistake that could hurt Russia’s economic and military strength for years.

Russia’s best if not only option is to end the war as soon as possible. From all indications, Putin is looking for a way out. Several weeks ago, Russia informed Kyiv it would halt all military actions if Ukraine agrees to remain neutral in the future, acknowledges Crimea as Russian territory, and recognizes Donetsk and Lugansk as independent states. When Ukrainian negotiators balked, Putin declared the talks had reached a “dead end.” But a few days later, he did an abrupt about face and sent new proposals to the Ukrainians. Although Russia’s terms are still harsh, they are a far cry from Putin’s original goals of completely “de-militarizing” and de-Nazifying” Ukraine. Significantly, the Russian leader is no longer talking about toppling Zelenskyy’s government or controlling all of Ukraine. Even Russia’s current escalation in the Donbas region suggests that Putin is desperate for any victory that would allow him to negotiate a peace with honor.

Obviously, Putin cannot be trusted, as evidenced by his constant lies and brutal attacks on civilians. Still, diplomacy is the best way out of this mess. Hopefully, Ukrainian leaders will not overreach at the negotiating table. They will see the wisdom of allowing Putin an exit ramp if it means they can negotiate a settlement that will save their people, most of their country, and possibly the entire world.

Meanwhile, Russian and Ukrainian forces are positioning themselves for a new round of fighting in Eastern Ukraine. The whole world is watching, hoping that a negotiated end to the crisis will keep nuclear hounds from hell at bay. This is a no-win situation. No matter how this war ends, it won’t make amends for war crimes or bring back all the innocent people who have died. Nor will it result in world peace or even restore the imperfect political order that had been in place since 1945.

But, ending the war in Ukraine will avoid World War III. Ukrainians, Russians, Americans, and everyone else worldwide should grab that “consolation prize” while they still can. All those who insist on all-out victory, regime change, war crimes convictions, no-fly zones, or other forms of escalation should heed Barry McGuire’s message from 1965: “This whole crazy world is just too frustratin'…and you tell me over and over and over again my friend, ah, you don't believe we're on the eve of destruction.”