Elise Lemire is Professor of Literature at Purchase College, SUNY, and the author, most recently, of a book about Vietnam Veterans Against the War entitled Battle Green Vietnam: The 1971 March on Concord, Lexington, and Boston. 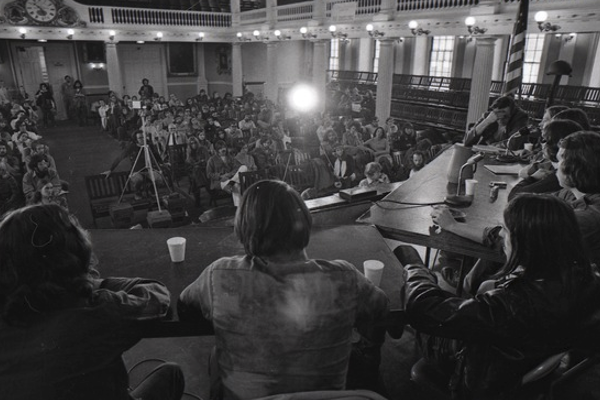 Members of Vietnam Veterans Against the War offer testimony at a panel on drug abuse at Faneuil Hall, Boston, October 10, 1971.

On this sixty-eighth Veterans Day, the American citizenry will thank its veterans for risking their lives to protect the United States and its freedoms.

Many veterans have and continue to provide other veterans with life-saving mental health assistance.  Others have become, and are still serving as, antiwar activists.  In the past half-century, a great number have done both, as best evidenced by the actions and activism of the organization Vietnam Veterans Against the War (VVAW).  By 1970, and with help from psychologists like Dr. Jonathan Shay, the VVAW membership came to understand that stopping future carnage is the only way to alleviate crushing feelings of guilt.  At great personal risk to their relationships, their reputations, and even their job prospects, these Vietnam veterans bravely stepped out from behind the warrior image that pervades our popular culture and revealed their broken hearts.

What the VVAW membership said at the organization’s Winter Soldier Investigation from January 31 to February 2 and in front of the Senate Foreign Relations Committee on April 22 in 1971 is all the more striking today when we consider how closely their public revelations match what Russian soldiers recently said in private phone calls to their loved ones about President Putin’s invasion of Ukraine’s capital city of Kyiv. (These phone calls were intercepted by Ukrainian officials and, on September 28, 2022, printed in translation by The New York Times.)

Once again, soldiers are learning that the casualties of war are never just the fighting forces who are injured or killed.  The soldiers who physically survive suffer what Dr. Shay calls a moral injury which, although imperceptible on the outside, can be life-threatening.

Here are some of the moral injuries enumerated by Vietnam veterans and recently suffered by Russian soldiers.

Warning: soldiers often use graphic language to describe their experiences.

Soldiers are asked or forced to kill civilians.

Michael Kenny, US Marines: “Circumstances would come up where there would be a patrol walking along, a single person or a small group of persons would be sighted at a distance of anywhere from, like, one to maybe five hundred meters. The standard procedure was to holler ‘Dong Lai!’ which is ‘Stop.’ A lot of times the civilians or Vietnamese couldn't hear at that distance and if they didn't respond immediately, the procedure was to have the squad or platoon open up on these people. Upon approaching the bodies, it was usually found that these people had no weapons at all; that the only reason they hadn't stopped was that they hadn't heard or were frightened.”

Sergey, a Russian soldier in Ukraine: “They told us that, where we’re going, there’s a lot of civilians walking around.  And they gave us the order to kill everyone we see….  I’ve never seen so many corpses in my fucking life.  It’s just completely fucked.  You can’t see where they end….  I’ve already become a murderer.  That’s why I don’t want to kill any more people, especially ones I will have to look in the eyes.”

John Kerry, US Navy: “Where is the leadership? We are here to ask where are [former Defense Secretary (1961-1968) Robert] McNamara, [former National Security Adviser (1966-1969) Walt Rostow, [former National Security Adviser (1961-1966) McGeorge] Bundy, [former Deputy Defense Secretary (1961-1964) Roswell] Gilpatric and so many others….  These are commanders who have deserted their troops, and there is no more serious crime in the law of war.”

Aleksandr, a Russian medic sent to Ukraine with the 237th Airborne Regiment: “Putin is a fool.  He wants to take Kyiv.  But there’s no way we can do it.”

Roman, a Russian soldier in Ukraine: “Fucking higher-ups can’t do anything.  Turns out, they don’t really know anything.  They can only talk big in their uniforms.”

Christopher Soares, US Marines: “We lost, I'll be very conservative, at least 50% of these 2,000 men in this operation [Operation Dewey Canyon, an American military invasion of the neutral country of Laos]….   I remember an incident in which… two squads got ambushed one right after the other and wound up with three men killed and fourteen wounded and not one enemy soldier killed. And that's the way we fought in Laos. I mean, like, just everybody was being killed, left and right, and they called this operation a success.”

Unnamed Russian soldier in Ukraine: “Dear, I really want to go home.  I'm so fucking tired of being afraid of everything.  They brought us to some fucking shithole.  What are we fucking waiting for? To be fucking killed?”

Sergey: “There were 400 paratroopers. And only 38 of them survived.… Because our commanders sent soldiers to the slaughter.”

Soldiers are expected to treat the people they were sent to conquer as less than human.

Scott Camil, US Marines: “When you shot someone you didn't think you were shooting at a human. They were a gook or a Commie and it was okay. And anything you did to them was okay because, like, they would tell you they'd do it to you if they had the chance.”

Nikita, a Russian soldier sent to Ukraine with the 656th Regiment of the National Guard: “Everything was fucking looted.”

There is no justifiable reason for the violence.

Sean Newton, US Marines: “The Communist threat was brought up time and time again [during Basic Training], like, you had to go over there and do this thing so that they wouldn't come invading the United States, make a beach landing, or something or other.”

Sergey: “Mom, we haven’t seen a single fascist here....  This war is based on a false pretense. No one needed it.  We got here and people were living normal lives….”

These moral injuries destroy soldiers’ faith in their country and its institutions.

Don Duncan, US Special Forces: “The [American] men keep getting killed. And every day the rage builds up, and the hate grows a little harder. And that rage must vent itself. And who do we blame this rage upon? The captain that gave the order to attack? The people that sent them over there so the captain could give them that order? Or the people who are shooting at you? The Vietnamese are shooting at you, and fuck it, you'll kill Vietnamese, that's what you're in Vietnam for. So that terrible hatred spills out. And the whole thing not only destroys Vietnamese. It destroys the people who are destroying the Vietnamese.”

Vlad, a Russian soldier in Ukraine: “Fuck the army.”

President Nixon was unable to fulfill his goals in Southeast Asia because scores of American soldiers on the ground evaded or refused orders and thousands of others who made it home chose to reveal the truth about the illegal and immoral nature of the United States’ aims and its military strategy.  The intercepted phone calls published in The New York Times are reason to hope for a similar backlash in Russia.