by Judith Giesberg and Paul Steege

Judith Giesberg, PhD, is a Villanova professor and civil war historian who is known for her work on the Last Seen Project.

Paul Steege, PhD, is a Villanova associate professor of history. He is a go-to expert on twentieth-century Germany and researches the history of violence in everyday life. 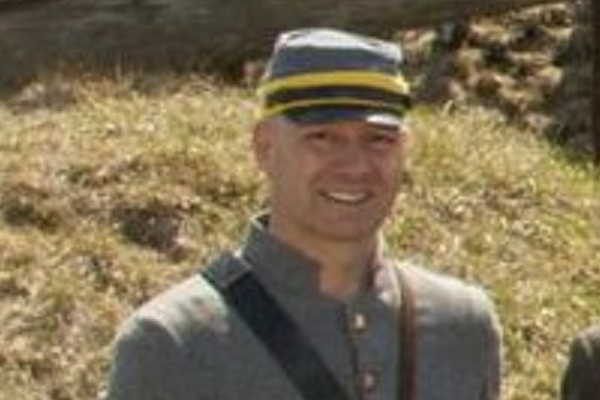 On Sept. 16, Doug Mastriano, the Republican nominee for governor in Pennsylvania, held a rally in Chambersburg, Penn. featuring Donald Trump, Jr. But the rally’s viral moment occurred when Lance Wallnau, a self-proclaimed evangelical leader and futurist, asked the crowd to put their right hands in the air while he commemorated the Battle of Gettysburg. It was a historical mad libs moment, combining a motion associated with Nazi Germany and Civil War nostalgia. Meanwhile, Mastriano himself has been photographed wearing a Confederate uniform. A Mastriano adviser accused those critical of Mastriano’s Confederate uniform as seeking to “erase history” and invited reporters to go on a Gettysburg tour with the candidate, suggesting that they would “learn a lot.”

By playing with this sort of historical quotation—in word and deed—politicians and activists invite people who might embrace extremism to do so. The use of such symbols is a warning sign that democratic norms are crumbling.

But those who would defend democracy in 2022 can draw on history, too. We can learn from past assaults on democracy, whether during the Reconstruction-era United States or the Weimar Republic in interwar Germany, that such symbols matter.

After the Civil War, U.S. forces occupying the South banned the wearing of Confederate uniforms as an effort to quash the continued armed resistance to federal authority. While Congress worked out the details of Section three of the 14th Amendment that disfranchised former rebels, the Army recognized that the performance of Confederate rituals such as wearing the uniform was part of a campaign to intimidate Black voters and threaten Black officeholders building local governments. The government determined that these were not empty rituals but were powerfully connected to the willingness to resort to White supremacist violence.

Ex-Confederates also recognized the power of symbols. And they sought to co-opt Lincoln’s memory. They justified their opposition to the civil rights of African Americans, for example, by portraying the murdered president as sympathetic to the plights of poor southern Whites who were “crushed” by Reconstruction policies — the “Great Heart” as he was remembered in the racist 1915 movie, “Birth of a Nation.”

After Reconstruction ended, symbols became powerful tools in the hands of those working to reverse the progress made toward a biracial democracy.  Confederate veterans and women’s groups promoted a Lost Cause version of history that sought to establish white supremacy as the Civil War’s legacy. Their progress toward this end could be measured by the monuments and Confederate flags that began appearing everywhere in the early twentieth century. Reviving these once outlawed symbols was dangerous then and now.

In the 20th century, democracy’s defenders continued to recognize the power of symbols. For example, as the Nazi threat emerged in Germany in the early 1930s, public displays were subject to similar scrutiny.

In June 1930, the state of Prussia (of which Berlin was part) banned the wearing of Nazi stormtrooper (SA) uniforms. This regulation sought to restrict the visible performance of Nazi force and to control the violence that often accompanied such demonstrations. Even after the 1930 ban, police in Berlin regularly encountered young men wearing khaki trousers or white shirts. At what point did their sartorial decisions cross over into a banned political act? Records in the Berlin State Archive testify that police ultimately decided that whenever three or more people gathered in similar clothing that “diverged from a civilian norm,” they should be cited as violating the Prussian state’s restrictions on the Nazi paramilitary organization.

German authorities’ opposition to the Nazis proved rather half-hearted. Within two years, uniformed stormtroopers were legally back on the streets, and German conservatives used an emergency decree to take over the Prussian State. They justified their assault on a democratic government as a defense of national order. But their tolerance of Nazi violence helped foster a public embrace of a politics that would culminate in genocidal war.

During a 1973 performance at Cologne’s annual Carnival, a West German comedian warmed up the crowd by leading it through a series of familiar call and response rituals. When he concluded by yelling “Sieg,” the crowd obligingly (unthinkingly?) responded, “Heil!” As the crowd laughed, not all that uneasily it seems, he expressed ironic surprise that there were so many “old comrades” in the audience. Although he quickly moved on to his next bit, the power of his humor was its ability to call out the implicit reality of 1970s West Germany: the rituals of Nazi Germany remained disturbingly familiar to many of its citizens.

These examples are a reminder that how people choose to present themselves for public interpretation matters, and historians should draw attention to actions that tend to elude scrutiny in the relentless churn of the news cycle.

After the Mastriano rally, Wallnau dismissed critics who identified his actions as fascist. He claimed that the viral clip had merely captured him leading the attendees in a prayer to commemorate Joshua Chamberlain’s famous bayonet charge down Little Round Top on July 2, 1863. Audience members raised their arms as Wallnau recited, “Pennsylvania will be like Little Round Top and America will have a new birth of liberty.”

His words called to mind President Abraham Lincoln’s visit to Gettysburg to dedicate the cemetery there four months after the battle. He urged listeners to defeat the Confederacy and give the nation “a new birth of freedom.” The freedom Lincoln referenced was emancipation. But Wallnau’s choice to replace “freedom” with “liberty” plucked the battle out of the context of a nineteenth century war over human freedom and placed it into a twentieth-first century contest over supposed government overreach and the right of (violent) revolution.

The power of symbols — and of symbolic gestures — is that they never possess just one meaning. Lance Wallnau can always claim, with a veneer of plausible deniability, that the action he was orchestrating at that rally in Chambersburg was not a visible evocation of the Nazi salute. But we can’t permit Wallnau or Mastriano simultaneously to claim historical expertise and historical ignorance.

Like that Cologne crowd in 1973, many Americans in 2022 may be willing to discount as unimportant that many in the United States are willing to don Confederate uniforms, to fly Confederate and Nazi flags or to offer up some version of a Nazi salute. But these symbolic gestures remain much more than familiar rituals. They evoke a political movement that repudiated the freedom that Chamberlain fought for, and that Lincoln celebrated in his Gettysburg Address.

Gathering in a parking lot 25 miles west of Gettysburg, Wallnau cosplayed the Battle of Gettysburg to channel a specific kind of male fantasy, one that aspires to fight not just in an imagined past, but on behalf of a racist and authoritarian future. In that kind of role-playing, a Nazi salute fits right in. Ultimately, if American political movements decide to mimic Nazis, we should take them at their word.