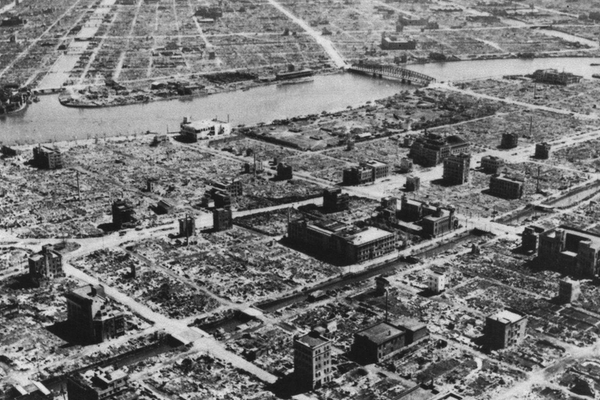 A former Nieman Fellow at Harvard, James M. Scott is the author of four books about World War II including Target Tokyo: Jimmy Doolittle and the Raid that Avenged Pearl Harbor, Rampage:  MacArthur, Yamashita and the Battle of Manila, and The War Below.  In his latest book, Black Snow: Curtis LeMay, the Firebombing of Tokyo and the Road to the Atomic Bomb, Scott details the most destructive air attack in history, the firebombing of Tokyo on the night of March 9-10, 1945 which claimed more than 100,000 lives. His narrative includes the troubled development of the B-29 bomber and the rise of General Curtis LeMay, who developed the low-altitude firebombing strategy. Here, in an interview with History News Network, Scott discusses how and why he wrote the book.

Q.  I am curious about how you got started writing history and why you are particularly interested in the U.S. vs. Japan struggle in World War II.

My first job out of college was as a public-school English teacher in Japan where I taught middle school in a small town of about 20,000 residents on the main island of Honshu. I volunteered as well to teach a course at night at my town’s community center. In that class, some of my students, who were children during the war, talked to me about the B-29 campaign and having to escape Japan’s cities. It was the first I ever really learned about that part of the war, and I was fascinated.

During my time there, I likewise made a trip to  Hiroshima. A couple weeks later, I flew to Hawaii to meet my parents, who were there on vacation. My father had served in the Navy, so the first place we visited was Pearl Harbor. Therefore, in the span of about two weeks, I experienced what for America represented the beginning and the end of World War II. Needless to say, I was hooked.

Q. Some of the most fascinating parts of Black Snow are the first-hand accounts of the Japanese survivors in Tokyo. These voices are often lacking in other WW II histories.  How did you access those records and how did that influence your writing of this history?

I don’t speak much Japanese unfortunately, despite having studied it while living there. I have been very fortunate over the years to develop some great friendships and contacts in Japan, who have always been so gracious to help me in my research, from pulling records to arranging interviews and translators.

The Japanese side of the story is one that I feel has long been overlooked in the examination of the firebombing of Tokyo, despite the fact that there are voluminous materials available to researchers in Japan. There is an entire museum in Tokyo dedicated to the March raid, where survivors often give lectures to school children and visitors. There are great historical accounts and numerous secondary sources as well. All of them, however, are in Japanese, which has limited American researchers from using many of those important sources.

For me, I was particularly interested in what that firestorm was like and how people survived it. I wanted to capture that visceral experience for readers, to take them inside that inferno and show them what it looked like, smelled like, and even sounded like. In short, I wanted to recreate it for readers.

Q. I was surprised to learn that General Curtis LeMay made the decision to begin the firebombing raids on his own initiative at his Pacific base, without explicit approval from Washington D.C. Was this kind of “lone wolf” action a lesson for General Marshall and other war commanders? Did the firebombing raid decision affect the atomic bomb decision process?

LeMay benefited from the unorthodox structure set up to govern the B-29 campaign. Army Air Forces commander Gen. Hap Arnold, from the outset, was adamant that his bombers function as independent operators and not be pulled into Douglas MacArthur’s or Chester Nimitz’s orbit. To do this, he convinced the Joint Chiefs of Staff to allow him to create the 20th Air Force under his direct control. He would then report directly to the Joint Chiefs. Arnold, of course, worked in Washington, so LeMay was his operator in the Marianas.

Arnold, however, suffered a major heart attack in January 1945, and ended up in Florida convalescing. In his absence, LeMay was left with Arnold’s chief of staff, Lauris Norstad. LeMay not only outranked Norstad by a star, but he also didn’t really trust him. This led LeMay, who by nature was a pretty solitary individual, to hold his cards close. He didn’t tell Norstad of his plans to firebomb Tokyo until the day of the mission, when Norstad landed in the Marianas for a visit.

As for the atomic attacks, LeMay’s operation really served as an important trial balloon to see how the American public would respond to the mass killing of enemy civilians, particularly since this attack occurred soon after the firebombing of Dresden, which remains controversial even today. To the surprise of many in Washington, however, the American public voiced no real objection. “Properly kindled,” Time magazine wrote in 1945, “Japanese cities will burn like autumn leaves.”

Q. Most Americans are aware of how the U.S. dropped the first atomic bomb on Hiroshima, but many may not be aware that the firebombing raids on Japanese cities killed more civilians. What lessons about military decision making, if any, would you like readers to take away from Black Snow?

You are exactly right. So many folks know of the atomic attacks, but are stunned to learn of the incineration of Tokyo, Osaka, Nagoya, and dozens of other Japanese cities in the waning months of the war. The atomic attacks, however, did not happen in a vacuum. Those strikes were the last stop on America’s march toward total war.

Q.  As you note in the Epilogue, General LeMay’s reputation greatly suffered after he agreed in 1968 to be the vice presidential candidate in Governor George Wallace’s campaign for president. In Black Snow you paint a very favorable picture of LeMay as a strategic thinker and a military commander who cared about his air crews. Did your research change your view of him?

Absolutely. Like so many others, I began my project far more familiar with LeMay based on the controversial end of his career than on his wartime service. As I dug into his life, my view of him really changed. He was an incredibly hard worker, who gave tremendously of himself to the war. He rarely saw his family, and he was lucky to sleep more than four hours a night.

He had studied engineering in college, and was a natural problem solver, which is what you need in war. What was also fascinating was to read his efficiency reports in his personnel file, where amazing aviators, like Jimmy Doolittle, wrote that he was one of the best combat commanders produced by the war. You can’t get any higher praise than Jimmy Doolittle.

Q.  What do most Japanese today think about the firebombing?  Is it taught in history books?  Will your book be published in Japan? The U.S. and Japan are, of course, close allies today, but do some Japanese feel the firebombing was a mistake or unnecessary?

In Japan, the firebombing, much like here in the United States, has been overshadowed by the atomic attacks. That is evident in the beautiful national museum in Hiroshima compared to the small, privately funded one in Tokyo.

That said, there remains interest in Tokyo and there have been many books published on it by survivors and historians. Many of the survivors I talked to place a lot of blame on Japan’s leaders at that time, who unnecessarily prolonged the war even after it was obvious Japan was defeated. That delay in surrender cost hundreds of thousands of civilian lives.

I would love to see Black Snow published in Japan. I think the book fairly captures the story from all sides and could be a great resource for both Japanese readers and historians.