The visit to Saudi Arabia undertaken by U.S. President Barack Obama has raised more questions in the Arab media than any other visit by a superpower leader to any country in the world.

The visit came at the heels of severe crises in international relations—from Crimea to Kiev, Libya’s resurging violence, the unending war in Syria, an escalating security breakdown in Yemen, urban terror in Egypt, and car bombs in Lebanon and Iraq.

The most important question regarding the visit was raised by Arab and Saudi journalists: “Why is this visit taking place now, and at whose request?” Analysts are justified in their confusion as America’s president has not visited the Kingdom since 2009.

So there must have been an unusual motive for this journey, a few months after the conclusion of a nuclear deal with Iran and the deal over Syrian chemical weapons possessed by President Bashar al-Assad. Saudi officials revealed that the visit was at the request of the White House and aimed at “clarifying some of the steps Washington has taken in the region, including about Syria and Iran.”

Hence the second question was about substance: what are the disagreements between Riyadh and the Beltway, and are they uniquely about the new U.S. policies regarding Damascus and Tehran?

International media discussions and think tank analyses agreed on the notion that the Obama administration wanted to reassure Saudi Arabia, and perhaps its allies in the region, that the United States had their backs in case of Iranian aggression and that the nuclear deal with the Ayatollahs “won’t be a bad deal”—to use the words of President Obama. 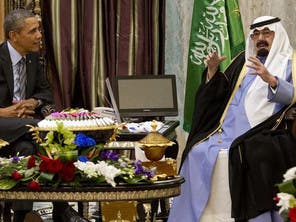 That may be true, but as I argued on Al Arabiya, there is much more to the summit than just a "clarification of U.S. foreign policy." The issue is about Arab mistrust of Washington’s choices in the region and shift of partnership.

Not just Saudis, but the UAE, Bahrain, Egypt, as well as Jordan and Kuwait, and to some extent Yemen have been frustrated with the Obama administration for over two years now regarding a number of highly sensitive dossiers related to a common threat.

Obama missing the mark on Iran

As we have learned over the past weeks, a bloc of Arab moderate countries from the most populous (Egypt) to the wealthiest (Saudi) have put the Muslim Brotherhood on their list of terror organizations and withdrew their ambassadors from Qatar, which is now standing accused of provoking Brotherhood subversion in all these countries.

Thus the first Arab frustration with the Obama administration has been the latter’s partnership with an organization that has been attempting to seize the control of almost a dozen countries in the Arab world. Washington’s backing of Islamists against popular majorities in Egypt and the Arabian Peninsula has left a deep scar in Arab -American ties.

These maladroit choices, influenced by a growing “Islamist lobby” in Washington, have dealt a blow to the traditional trust between Arab allies of the United States. But another dossier seems to have also deepened the crisis between the two sides.

Last fall, the Obama administration abruptly ended a potential campaign to strike at the Assad regime chemical weapons system, which according to several reports had been used against civilians. Washington used a Russian initiative to abort the move, thus enabling the Baathist dictator to resume his massacres inside his own country.

Weeks later, the Obama administration conducted the most radical change of foreign policy in the region by cutting a political deal with the Iranian regime over the nuclear crisis. Without any guarantees, the United States began lifting sanctions and the White House threatened to veto any new sanctions leveled by Congress.

What is more, the Obama administration began releasing billions of dollars in frozen Iranian assets back to the Mullahs’ regime while companies rushed to Tehran to infuse cash and conduct business.

Predictably, the Khomeini regime resumed its build-up of strategic weapons, mainly missiles, and continued meddling in Iraq, Syria, Lebanon, and most worrisome to the Gulf, in Bahrain, Saudi Arabia, and Yemen. In the eyes of Arab moderates in North Africa and the Levant, Washington has gone too far by partnering with the Muslim Brotherhood and shielding Iran’s regime.

The Saudis, backed by the UAE, Bahrain, and behind the scenes by Egypt, Jordan and many forces opposed to the Islamists and the Ayatollahs, moved to signify to the Obama administration that a red line was crossed. Endorsing the Brotherhood was a mistake, but cutting a deal with the Iranian regime was a greater one.

The Arabian allies of the U.S. could not understand how a U.S. administration, after three decades of systematic collective policy of isolation of the Tehran regime, rushes to establish bridges with Iran without even consulting with allies. Some commentators have even uttered the word “betrayed.”

But the fortunes of this U.S. policy have been missing luck lately. In Egypt, a coalition between a popular majority and the army crumbled the ousted Egyptian president Mohammad Mursi regime, while in Tunisia the Nahda withdrew from the government under the seculars’ pressures.

On Syria, all American promises haver failed, as Iraq and Lebanon are falling under Iran’s increasing influence. With a region almost lost, the Obama administration had little choice but to attempt to salvage its influence by seeking accommodations with the Saudis—now more influential than before because of its good ties to the new Egypt.

It seems that the Saudi king has conveyed to President Obama the deep concerns and, most likely, their stance on Iran and the Brotherhood. The focus now is to see whether Washington’s foreign policy circles will change direction after this visit. The Iran problem of Arab moderates is not simply within the region, it is mostly in Washington.

Will the administration realign with the moderates in the region and consider working with the Iranian opposition, or will it continue in its deal with the regime and lose several allies America has gathered in the greater Middle East over the last few decades?

----------
Dr Walid Phares is the author of the newly released The Lost Spring: US Policy in the Middle East and the Catastrophes to Avoid. He also serves as an advisor to members of Congress on the Middle East.