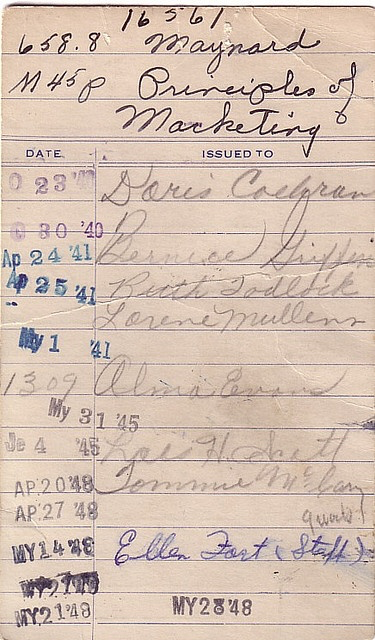 The explosion of information technology in recent decades has both aided and harmed the privacy of individuals.  Mention databases on people and the NSA and Edward Snowden immediately come to mind.  Library checkout systems rarely raise an eyebrow – until the Japan Library Association accused the Kobe Shimbun of violating the privacy of novelist Haruki Murakami by publishing the names of the library books he read as a teenager (including the three-volume collected works of Joseph Kessel, showing Murakami is an exceptional reader as well as writer).

The newspaper responded by calling Murakami a public figure and thus worthy of legitimate reporting.  Beyond the question of whether the coverage was justified stands the equally interesting question of how the newspaper found out.

By moving to computerized systems and sensors that read an identification card magnetically or visually, librarians have greatly simplified and sped up the process of checking out a book.  Today when I check a book out of my university, the librarians tell me the due date.  Our public library actually prints a flimsy tape with the name of the book and when it is due.  When I first arrived at Texas A&M last century, the librarian stamped the due date on a slip glued to the inside back cover.  That slip gave me a connection to earlier readers and a sense of the book’s popularity – was I the first reader in a month, a year, a decade?  Or possibly even the first person ever to check the book out?

In the 1970s when I was an undergraduate at Princeton University, our identification cards were hard plastic with raised letters and numbers just like the credit cards of that era.  Checking a book out meant physically placing your card in a machine under the checkout slip and another slip that the library retained.  Not only could I see when the book was last checked out, I could see who used it, creating a tie to past readers.  Nor was Princeton unique.  Many libraries, as the image above illustrates, used the even less expensive expedient of writing.

At one point I checked out physicist Gerald Feinberg’s 1968 The Prometheus Project: Mankind’s Search for Long-Range Goals, which argued that to survive near-term threats such as nuclear war, humanity needed to create major technological challenges that would take decades to accomplish cooperatively.  I found Feinberg’s premise challenging, but I was even more interested in a previous reader, Gerald O’Neill.

A physics professor at Princeton, O’Neill proposed building large space habitats at the L5 Lagrangian libration point, where the gravitational attraction of the Earth and moon balance each other.  His 1977 The High Frontier.  Human Colonies in Space generated a tremendous amount of popular, technical, and scientific interest though its realization remains, like many large technological projects, firmly in the future.

Seeing O’Neill’s card on The Prometheus Project showed me that the physicist had read a book advocating a major technological challenge to assure the survival and growth of the human species.  The High Frontier proposed exactly that.  How strongly Feinberg influenced O’Neill is unknown.  But the fact that the physicist read his fellow physicist’s book before proposing space colonies indicates some influence.

For me, finding O’Neill had read Feinberg gave me an insight into O’Neill’s proposal and the subsequent years of promoting space colonization.  More prosaically, the Princeton slips with names of previous readers and the Texas A&M’s slips with the earlier due dates linked me with those fellow readers.

Was looking at the back of the book to see who had previously checked it out an invasion of their privacy?  The Kobe Shimbun had discovered Murakami’s reading when the old books with their library slips were being discarded.  That was not intrusive hacking but something closer to dumpster diving.

That information about readers still exists but is now hidden within the library, its access confined to those who operate the check-out system.  The system is more efficient but I miss seeing how many readers preceded me.  My reading is a bit more isolated as a result, the literary equivalent of Robert Putnam’s Bowling Alone.  But my reading choices are no longer public knowledge.