The Religion of Patriotism 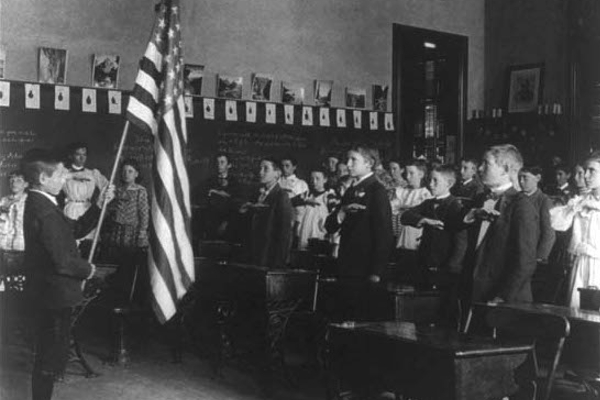 “I pledge allegiance to the flag of the United States of America and to the republic for which it stands, one nation under God indivisible with liberty and justice for all.”

I have not said that pledge for many years, but I remembered every word from all the times I had said it as a youth, in school and at other places. The history of that wording reflects the history of American patriotism.

The pledge was written by Francis Julius Bellamy (1855-1931) in 1892. He had studied at the Rochester Theological Seminary to become a Baptist minister, following his father, a Baptist minister in Rome, NY. He led congregations in Little Falls, NY, and then in Boston. Bellamy believed that the rights of working people and the equal distribution of economic resources were inherent in the teachings of Jesus. In the labels of the late 19th century, he was a Christian socialist.

His cousin Edward Bellamy, whose father was also a Baptist minister, shared Francis Bellamy’s late 19th-century version of liberation theology. He wrote the novel Looking Backward: 2000–1887 (published in 1888), a futurist fantasy in which a Boston man falls asleep in 1887 and wakes up in 2000, when the United States has been transformed into a socialist utopia: all industry is nationalized, working hours reduced with retirement at age 45, and equal distribution of all goods. Looking Backward, along with Harriet Beecher Stowe’s Uncle Tom’s Cabin, was among the great best-sellers of the late 19th century. His sequel, entitled simply Equality (1897), promoted equality for women, and imagined the television, air travel, and universal vegetarianism.

The Bellamy cousins wanted radical change, but so did millions at that time. During the last decades of the 19th century, often labeled the Gilded Age, rapid industrialization and capitalism unfettered by regulation led to widespread poverty and unprecedented concentrations of wealth. The top 1% owned half of the nation’s property, and the bottom 44% owned 1%. American industry had the world’s highest accident rate. Socialist and labor movements grew in response.

Francis Bellamy preached against the evils of capitalism, offered a public education class entitled “Jesus the socialist”, and was founding vice president of the Society of Christian Socialists. He was forced out of his Boston congregation in 1891. Daniel Sharp Ford, a member of Bellamy’s congregation who published Youth’s Companion, a children’s magazine, hired him to promote Ford’s campaign to put an American flag in every school. To coincide with the 400thanniversary of the voyage of Christopher Columbus in 1892, in coordination with the World’s Columbian Exposition in Chicago in 1893, Bellamy wrote a flag pledge published in Youth’s Companion in September 1892.

Bellamy’s pledge read: “I pledge allegiance to my Flag and to the Republic for which it stands, one nation, indivisible, with liberty and justice for all.” He later wrote about his thinking when composing the pledge. The Civil War led to his reference to “indivisible”. Although he was deeply religious, he strongly believed in the separation of church and state, thus including no reference to God. He had been inspired by the French Revolutionary slogan, “liberty, equality, fraternity”, but wrote, “No, that would be too fanciful, too many thousands of years off in realization. But we as a nation do stand square on the doctrine of liberty and justice for all.” He knew that most state superintendents of education were opposed to equality for women and African Americans.

Bellamy’s political thinking was among the most progressive of his era, but did not escape the racism inherent in American culture. He argued that the assimilation of non-white “races” into American society would lower “our racial standard”. His and Ford’s and official America’s veneration of Columbus was itself a political statement based on white supremacy and targeted at Italian voters.

As a national ritual of patriotism, the pledge has been yanked to the right in the 20th century. In 1924, the conservative leaders of the American Legion and the Daughters of the American Revolution persuaded the National Flag Conference to change “my flag” to “the flag of the United States of America”, despite Bellamy’s opposition. A much more serious distortion was added in 1954 with the words “one nation under God”. Although that change is often attributed to the recommendation of President Dwight Eisenhower, its longer history, as described by historian Kevin Kruse in One Nation Under God: How Corporate America Invented Christian America in 2015, is much more revealing.

In response to Franklin Roosevelt’s New Deal, which introduced significant regulation of business and empowered labor unions, giant corporations created a public relations campaign for big capitalism using organizations like The American Liberty League. This secular political campaign was a flop. Jim Farley, chair of the Democratic National Committee under Roosevelt, said, “They ought to call it The American Cellophane League, because No. 1: It’s a DuPont product, and No. 2: You can see right through it.”

Corporate America then turned to conservative Christian ministers, literally employing them to link capitalism with Christianity by arguing that the New Deal is evil and capitalism is “freedom under God”. In 1951, Cecil B. DeMille organized a Fourth of July ceremony, backed by the leaders of corporate America and hosted by Jimmy Stewart, carried live over national radio. Their message was that “the American way of life” was Christian individualism expressed in unchecked capitalism.

This is the background for the insertion of religious messages into American patriotic rituals. The pledge now asserted that the separation of church and state was un-American. “In God We Trust” appeared on a postage stamp that same year, 1954, and on paper money in 1955. In 1956, it became our first national motto. Since Ronald Reagan began using “God bless America” to end his speeches in the 1980s, that phrase has become a staple in both parties, like the flag pin as patriotic adornment.

The claim in the modern Pledge of Allegiance about “liberty and justice for all” is not true today. In the Jim Crow era, when I first learned to recite it, it was an outright lie. The stirring words of the national anthem about America, “the land of the free”, were similarly false. Like the Lost Cause mythology about the Civil War and its aftermath, which was enshrined in the school textbooks I read and taught as American history, these assertions were propaganda for an American society based on white supremacy. Patriotic rituals were designed to indoctrinate young and old with the belief that the racist, sexist, antisemitic America of the 20th century was already perfect, that criticisms of racial injustice or gender discrimination were illegitimate, that America was God’s country and corporate capitalism was God’s handiwork.

On Flag Day in 1943, the Supreme Court declared, in West Virginia State Board of Education v. Barnette, that a law requiring schoolchildren to salute the flag and recite the Pledge was unconstitutional. That ruling still stands as settled American constitutional law. Justice Robert H. Jackson wrote then, “If there is any fixed star in our constitutional constellation, it is that no official, high or petty, can prescribe what shall be orthodox in politics, nationalism, religion, or other matters of opinion.” Yet the patriotic rituals we take for granted do exactly that, prescribing that belief in a specific kind of God is patriotic and that freedom and justice for all already exist.