Blogs > Steve Hochstadt > Hooray for the Greens (But Not This Year)!

Hooray for the Greens (But Not This Year)! 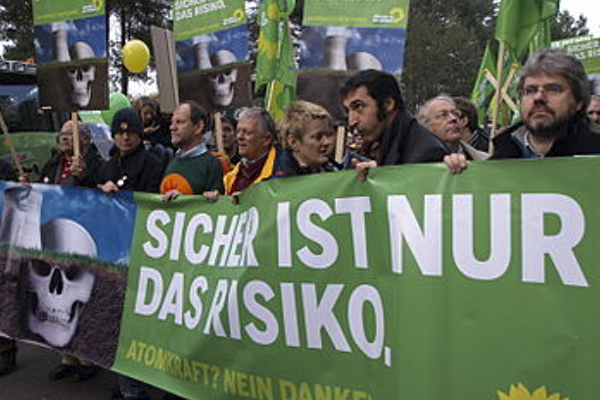 Hooray for the Green Party! Before there was a Green Party in the US, we rooted for the Green Party in Germany. They were a tiny group of committed environmentalists, with wonderfully advanced social and economic ideas. Unlike the US, but like most other democratic systems across the globe, third parties in Germany, and fourth and fifth parties, can shove the whole political system in the direction they advocate, as long as they can convince enough voters. Over the decades since their founding in 1980, Die Grünen have persuaded large minorities and in some places majorities of voters that they should govern. They are now coalition partners in the governments of 11 of Germany’s 16 states, and Winfried Kretschmann is the Minister-President of Baden-Württemberg, the equivalent of governor.

The American political system at nearly every level is hostile to third parties. The American Greens show no signs of being able to overcome these disadvantages. It is a symptom of our system that the Greens are widely viewed as a spoiler party, unfairly stealing votes from one of the Big 2. The best performance of a Green presidential ticket was in 2000, when Ralph Nader won 2.9 million votes, 2.7% of the total. If more than half of those Greens in Florida had voted for Al Gore, who lost the state by 537 votes, he would have won.

Since then, they have not reached 1%, except for 1.1% in 2016, when both major party candidates were so unpopular. Their membership reached over 300,000 in 2004, but has declined to about 250,000 now. This year they are not even on the ballot in 19 states. Their major candidates are Howie Hawkins and Angela Walker, both also nominees of the Socialist Party USA, who I don’t believe have ever held elective office.

The structural obstacles to Green success are not their only problem. Perhaps in overreaction to the label of spoiler, the Green Party is barely more polite than the Republican Party about those who don’t vote for them. Here’s what Virginia Rodino, co-chair of the Maryland Green Party, and Kevin Zeese, recently deceased former Attorney General in the “Green Shadow Cabinet,” say about the American voting public. The two major party candidates are “a certifiable, lying, murdering war criminal and a racist mass incarcerator,” who are representatives of the “two parties of the millionaires governing the United States since its founding.” Republican and Democratic voters “do not have faith in ordinary people” because they “remain shackled election after election to the corporate parties.”

Joe Biden has committed himself to the most liberal or progressive or even leftist program of any Democratic nominee in my lifetime. I don’t expect the Greens to even admit that, much less give him any credit. But I’d appreciate it if they gave me some credit, along with the millions of voters who have voted or will vote for Biden. They can’t even get their rhetoric straight: Trump “has to be removed,” but voters for Biden are themselves “immoral” because we “do not have faith in ordinary people.” I don’t find these Green leaders persuasive when they claim to be the only party with faith in ordinary people, but think that about half of American voters are committing a politically immoral act. I always thought most of us are ordinary people.

At another point in their diatribe, Rodino and Zeese narrow their focus: “people who live in states like New York, California, Maryland, and the other 30 solidly Democratic states would be wasting their vote if they vote for Biden.” According to the National Public Radio polling analysis, these 33 states in which a vote for Biden is immoral include 4 which lean Republican, 7 toss-ups, and the battleground states of Pennsylvania, Michigan and Wisconsin. If many potential Democratic voters took the Greens’ advice and decided not to “waste” their votes, they would hand a second term to Trump. The Green argument depends on lies about Biden as a candidate, insults to all Democrats, and electoral calculations which would hand another term to Trump.

The Green Party’s website takes a more positive approach, and is not so insulting to those who are not convinced that voting Green is the best way to get rid of Trump. Nowhere do they explain, however, why being Green necessarily means voting for Socialists. Their inability to come up with their own candidates this year shows their weakness and makes them even less likely to become a vital force for change.

I’m glad the Greens exist as another choice for voters. But this year, they are not a good choice.