The Mystery of the Great Seal


by Ann Banks' Confederates in My Closet

A number of unsolved mysteries surround my father’s copy of the Great Seal of the Confederacy.

This is the story I remember being told as a  child:  At the time of the Civil War, there was cast in solid gold a Great Seal of the Confederate States of America.  Toward the end of the war, to keep the seal from falling into the hands of Yankees, it was buried somewhere in Virginia.  Somehow its location was lost and the Great Seal has never yet been found (though many holes have been dug in search of it.)  At the time it was cast, however, four smaller replicas of the seal were made, also of gold. One of these replicas was handed down in my family until it came to my father.

This is the first version.

Our family did possess a copy of the Confederate seal; it had pride of place on our coffee table as we moved from one Army post to the next. I have extracted it from the Pile and it presently resides on my desk. The seal itself is a little more than 3 inches across, embossed with the image of George Washington on horseback, surrounded by a wreath made of wheat, sugar cane and other produce of the South. Along the base of the seal is the motto of the Confederate States: “Deo Vindice.”

If you ever doubt that the passions that inflamed the Confederacy are still alive, try Googling the translation of “Deo Vindice.” Google Translate renders it literally as “vengeful god.” Wikipedia suggests a few variations – while noting dryly that “the translation is open to some interpretation.”

A classics professor explains on his blog why he comes down on the side of "God as punisher.” The professor is then administered a sound thrashing by a Son of Confederate Veterans who demonstrates an impressive (to me, anyway) command of Latin grammar. He references a construction “known as the ‘ablative absolute’ to everyone who has ever studied even basic Latin” and, pursuing a circuitous route through a forest of Latin tenses and conjugations, concludes that the correct translation is “With God as [our] Champion.”

I have separated the seal from its protective glass bubble and frame; it’s now a naked disk. When I turn it over there on the back side is evidence of another story, another mystery: four black dots, unmistakably cigarette burns. This happened at one of my parents’ parties, when, I was told, a guest mistook the seal for an ashtray. This explanation is a little hard to credit since my parents had ashtrays the size of birdbaths on every surface. On the other hand, these were hard-drinking Army people, so who knows? I was in high school and by this time had come to detest the family Confederate relic. When I learned of its desecration, my reaction was to smirk. 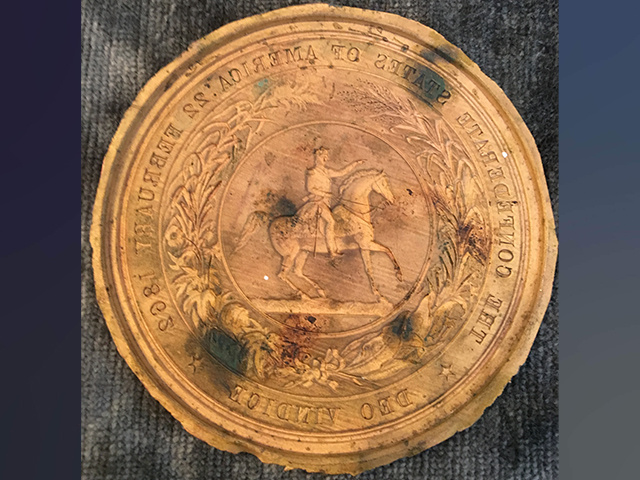 Cigarette burns on the back of the seal.

Years later I began to come across shreds of information that cast doubt on the origin of our heirloom. (Of course I could have been, and probably was, misremembering the family story, given its fairytale-like details.) The original Great Seal of the Confederacy was made not of gold, but of silver. And according to the account of a Mrs. Bromwell, it was not buried somewhere in Virginia; she smuggled it out of Richmond under the nose of the Yankees, hidden in her bustle.

About those four rare and precious copies of the seal, one of which has come down to me? Looking into this, I encounter the name of Colonel John T. Pickett (not even a distant relation of my family Picketts as far as I can tell). After the Civil War, he became a dealer in Confederate “curios and records.” Twice he tried to hustle four trunks of Confederate states records to the federal government for the asking price of a half-million dollars.

In 1872, John Pickett published a self-pitying statement in the New York Times, declaring himself still loyal to the Lost Cause and complaining that “the conqueror stripped me of every dollar, consigning my children to the verge of want and degradation and consigning me to insignificance and endless toil.”

The Colonel also got his hands on the Great Seal itself and ordered up 1,000 electroplate copies in gold, silver and copper. These were to be sold across the South as souvenirs, the proceeds intended to go to widows and orphans.

This is the second version.

It is the version I am prepared to believe. It suits my debunking temperament; it strikes another blow against the loathed heirloom; and in my mind it undercuts my family’s special connection to the Confederacy, if the seal is merely a plated-tin souvenir sold by the hundreds.

However, I also have in my possession, extracted from The Pile, a newspaper clipping that bears witness to yet another version of the story of the seal. It is a half-page article cut from the Gainesville Daily Sun in 1951. The headline: “Local Man owns rare Confederate medallion presented to his father by President Jefferson Davis.” Written by the Society Editor, the story begins, “A gold replica of the original seal of the Confederate States of America is here in Gainesville.” According to the article, this copy of the seal is one of “three or four such medallions in existence.”

Jefferson Davis, the president of the Confederacy, presented the seal at a reunion of Confederate veterans to one C.J. Harris, who served in the Civil War under General Longstreet. It came down in the Harris family to a Charlie J. Harris, the man who was interviewed by the society editor. (In another apocryphal story, a man named James Jones, who was enslaved by Jefferson Davis, claimed Davis gave him the seal and instructed him to bury it, which he did, taking the secret of its location with him to the grave.)

If the story in the Gainesville Sun is true, there are several reasons to think that it might refer to my copy of the seal: my Aunt May was a Harris, she lived in Florida, and I believe she might have been the one who gave my father the seal. Also someone in my family kept a copy of the article, so it must have had some personal meaning. Against this theory is the absence in my ancestor files of any of the supporting documents Mr. Harris told the reporter he possessed.

This version of the story should be easy enough to check. I could go straight to a dealer in Confederate memorabilia to have the seal appraised. Instead I call Robert Hancock, the Director of Collections at the Civil War Museum in Richmond, Virginia. He confirms for me that the original of the seal is not buried in some forgotten spot in the sandy loam around Richmond, but is part of the Museum collections, where it has been on continuous display for over a hundred years.

The only copies he knows of are the souvenir replicas Col. Pickett had made in 1873. He doesn’t know how many are still in existence, but more than four. “Every year,” he says, “I get three or four calls from people who say they have the Great Seal of the Confederacy. I tell them, ‘No, you have a copy of a copy of the Great Seal.” He suspects, as I do, that those Confederate widows and orphans never saw a penny of the proceeds. He has no clue about the advertising circular I found in the Pile peddling replicas of the Seal – nor has he ever heard of an organization called The Society of the Confederacy.

After this conversation, I’m happy to have a few more inaccurate details scraped away from the family story.  But in the end I decide that it doesn’t make any difference whether the seal on my desk is one of four or one of a thousand; or whether it’s made of solid gold, plated-tin or marzipan – it nevertheless stands for the same hateful beliefs. 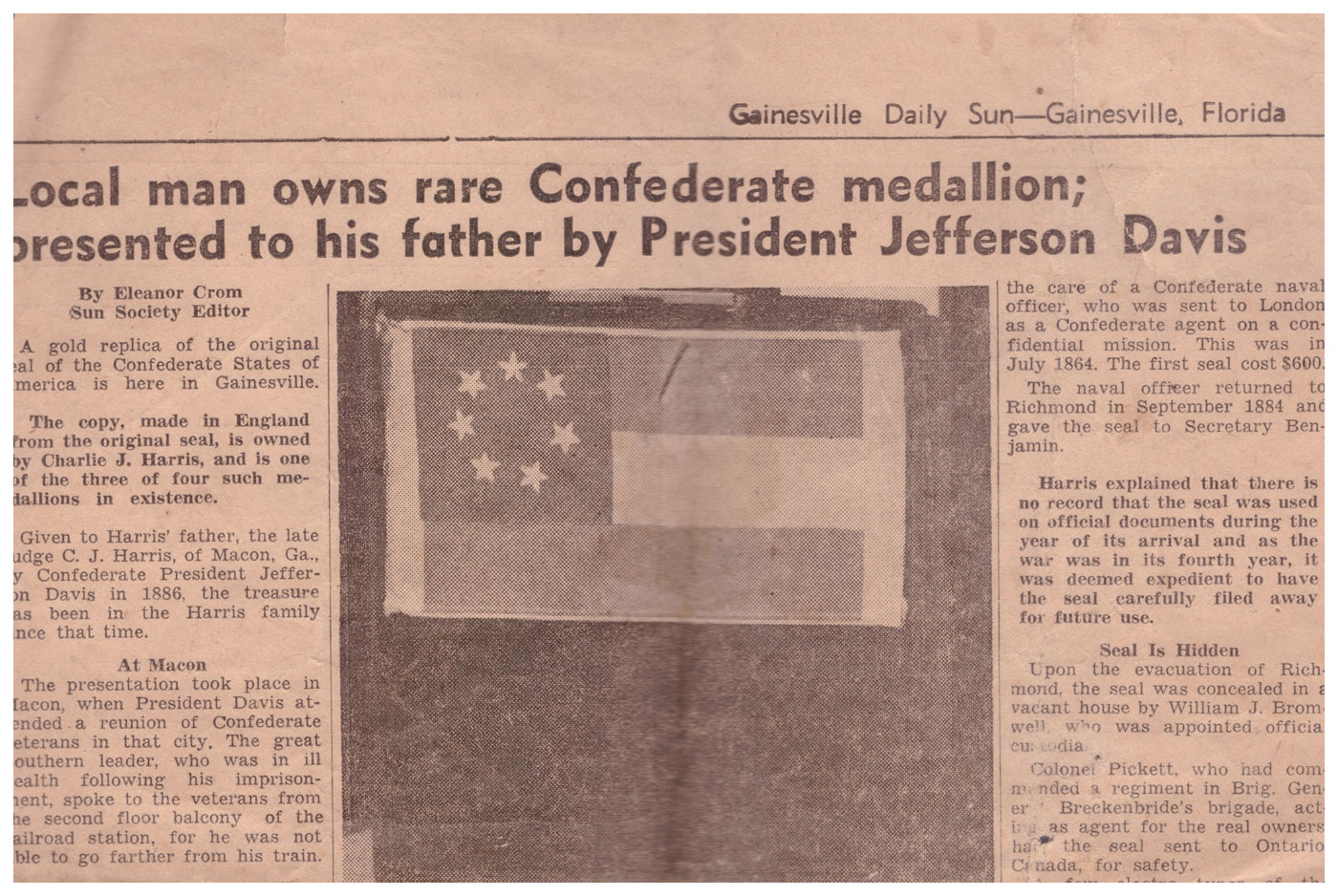 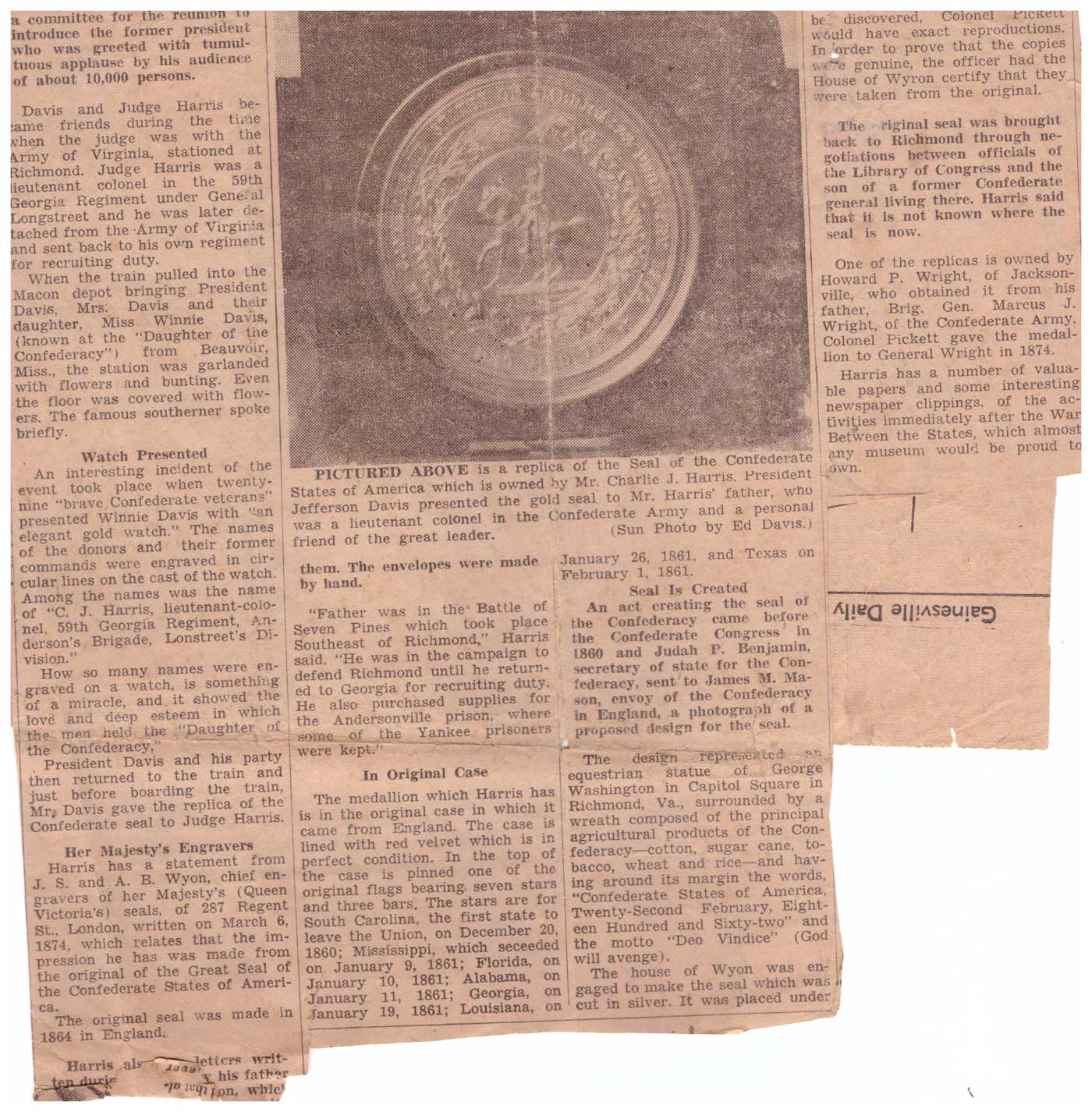 This 1951 Gainesville Sun story tells another story about the Seal.

There lurks another, more uncomfortable question about the family heirloom.  Why did my father keep it prominently on display all those years?  It couldn't have been just to mollify my Aunt May, staunch Daughter of the Confederacy though she was.  The seal remained on our coffee table even when Aunt May was three states away.

I never knew my father to express support of the Confederacy; the opposite, in fact. In joining the Army he’d distanced himself from his Alabama roots and the closed society of the Old South.  Yet he obviously treasured our Civil War relic.  Why?  What did it mean to him? We were nomads, in the way of Army families, and we, his children, didn’t belong anywhere.  But he did.  Through our many moves, did he cherish owning a valuable reminder of his ancestors?  Did he like looking at the seal and remembering that he was descended from Rebel generals and plantation aristocrats?

For me, that is the real mystery of the seal. 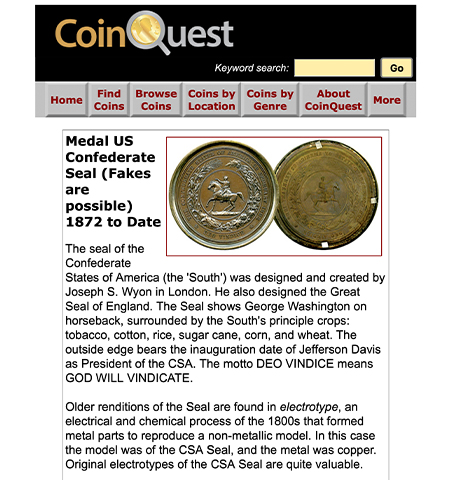 Read more about this topic on the Confederates In My Closet website.