Valor Roll: American Newsies in the Great War and the Flu Pandemic

Vincent DiGirolamo is associate professor of history at Baruch College of the City University of New York and author of Crying the News: A History of America’s Newsboys (Oxford University Press, 2019), winner of the 2021 Vincent P. DeSantis Prize from the Society for Historians of the Gilded Age and Progressive Era and other awards. 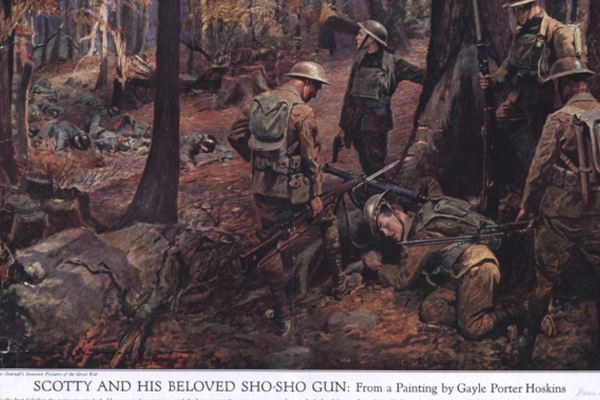 Newsboy Albert Edward Scott of Brookline, MA enlisted at age 15 in 1917. The scene depicts his death by a sniper's bullet after defending a road as a machine gunner. "Scotty" was the youngest American casualty of the war.

World War I presented new opportunities to honor newsboys, particularly those who joined the armed forces. The Boston Globe made a minor celebrity of Fifekey Bernstein, the first Boston newsboy to enlist in the war. The Chicago Tribune placed former Loop news crier Joe Bagnuola on its “valor roll” after he distinguished himself as a battlefield messenger. And the Hartford Courant lauded the fighting spirit of Nat Fierberg, who joined the army to avenge the death of his brother Sam, a former Main Street hawker. Sam had enlisted at age 14 and died at Seicheprey, the first major action involving US ground troops. The Courant commended the boys who joined up “to make news instead of sell it.”

Newspapers also applauded newsboys who demanded to see the draft cards of suspected “slackers,” who taunted those who drove on gasless days as “Hun lovers,” or, in the case of a 10- year-old in New York, who gut-punched a suspected German spy as he was being led through Penn Station under armed guard.

Newsboys were anything but slackers. Newsboys’ homes supplied many raw recruits. Father Dunne’s home in St. Louis sent 126 residents into the armed forces, five of whom were killed in action. The Brace Memorial Home in New York contributed 2,890 current or past residents to the military. Its superintendent signed enlistment papers for 1,600 boys. Fifteen were killed in action and twenty were wounded. The first to fall, at Château-Thierry, was George “Blackie” Kammers. Others included “Libby” Labenthal, a pitcher on the home’s baseball team, and Peter Cawley and Jackie Levine, who starred in the home’s minstrel shows. Their inch-long obituaries mention their affiliation with the Newsboys’ Lodging House, just as those of Ivy Leaguers mention their association with Harvard, Princeton, or Dartmouth.

Eighteen was the minimum age for induction into the army, yet boys like Sam Fierberg sometimes lied their way into service. The foremost example is Albert Edward Scott, a newsboy from Brookline, Massachusetts, who enlisted in July 1917 at age 15 and became a machine gunner in the 101st Regiment. The youngest American casualty of the war, “Scotty” died defending a road near Epieds, killing thirty “boches” before a sniper got him. He received a hero’s burial in France and posthumous honors at home. An oil painting by Gayle Porter Hoskins showing four soldiers gathered around Scotty’s body in the woods was one of the Ladies’ Home Journal’s “souvenir pictures of the Great War.” The Roosevelt Newsboys’ Association raised funds to install a bronze tablet and bas- relief sculpture of the painting in Brookline’s town hall. Vice President Calvin Coolidge ordered two navy destroyers to convey a three- hundred- piece newsboy band from New York for the dedication ceremony, attended by former secretary of state William Jennings Bryan. Scotty was eulogized as a “steady, self-reliant, manly American boy” who “did his duty in war and in peace, in France and in Brookline.” On a visit to Boston, Marshal Ferdinand Foch, supreme commander of the Allied armies, left a wreath of roses bearing the French tricolor to be placed on Scotty’s tablet. The next year the corner of Chambers and Spring Streets in Boston was renamed Benjamin Rutstein Square after a popular West End newsboy killed in the Argonne in 1918. Thus did newsboys participate in the culture of commemoration that followed the war. Plaques, parades, paintings, wreath layings, and street dedications helped give meaning to the slaughter and replenish the wellsprings of nationalism.

Movies and songs about newsboy proliferated during the period, and some directly addressed the theme of making the world safe for democracy. The silent film Ginger, the Bride of Chateau Thierry, follows two tenement sweethearts who are separated when Ginger is adopted by a judge. She befriends his son Bobby but stays true to newsboy Tim Mooney. Once grown up, the two men vie for her hand, but they call a truce when war is declared; they ship out to France, and Ginger follows with the Red Cross. When Tim is wounded, Bobby risks his life to carry him to a hospital where he dies in Ginger’s arms, freeing her to marry Bobby. The movie, which includes actual scenes of trench combat, portrays the war as a great crusade unifying the classes. Striking the same note musically was the 1919 Tin Pan Alley flag-waver “I’d Rather Be a Newsboy in the USA than a Ruler in a Foreign Land.” One critic called it “pathetic patriotic piffle,” but it got a smile from AEF commander Pershing when sung for him by a wounded Yank at Walter Reed Hospital.

One of the most devastating effects of the war was the influenza pandemic of 1918, which killed 650,000 Americans and 50 million people worldwide. The scourge pushed war news off the front pages and took its toll on many of the children and elderly who sold those papers. One casualty, “Mullen the newsboy,” was a Chicago Loop vendor who gained notoriety after passage of the Seventeenth Amendment by vowing to run for the Senate and introduce legislation allowing indigent newsboys to live in old-soldiers’ homes. Chicago newsies came under scrutiny as potential carriers of the disease because of their habit of spitting for good luck on every nickel earned. Newsies in Norwood, Massachusetts, had to put their money on a table for the manager to spray with a disinfectant before he’d touch it. In Harrisonburg, Virginia, the Daily Independent suspended publication after its entire workforce fell ill. Newspapers from Pueblo, Colorado, to Winnipeg, Manitoba, outfitted carriers with gauze masks to protect their health and alleviate subscribers’ fears. The Wichita Eagle went further, offering its newsboys mittens, health insurance, and the services of a physician.