Ray E. Boomhower is senior editor at the Indiana Historical Society Press, where he edits the popular history magazine Traces of Indiana and Midwestern History. A former newspaper reporter, Boomhower has written extensively on World War II media history, including biographies of such noted war correspondents as Scripps-Howard columnist Ernie Pyle and Time magazine reporter Robert L. Sherrod. His book Richard Tregaskis: Reporting under Fire from Guadalcanal to Vietnam will be published on November 15, 2021 by High Road Books/University of New Mexico Press. 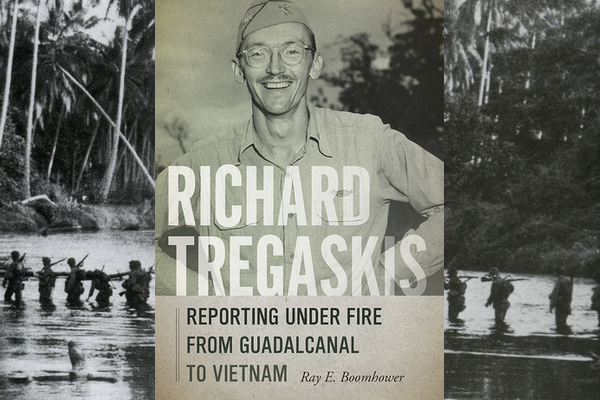 For two months in the summer of 1942, Richard Tregaskis, a young correspondent with the International News Service, had toiled away in the Southwest Pacific to report on the news from a little-known island in the Solomons named Guadalcanal. Tregaskis had joined the approximately 11,000 men of the First Marine Division who stormed the beaches on August 7, 1942, to seize the island from the Japanese.

Tregaskis was no stranger to combat at this point in his career and had always been eager to be close to where American forces were fighting, serving as an embedded reporter long before the term came into use. He watched from the deck of a U.S. Navy cruiser as Lieutenant Colonel James Doolittle’s B-25B Mitchell bombers took off from the carrier USS Hornet to bomb Tokyo. Later, he was on the Hornet to witness its dive-bombers and torpedo planes, several which did not return, hurtle off the ship’s flight deck on their way to attack the Japanese fleet during the critical Battle of Midway.

The Guadalcanal landing marked America’s first use of ground troops in a major offensive against the Japanese Empire. Tregaskis’s dedication to his job during his time on Guadalcanal impressed the marines’ commander, General Alexander Vandegrift. The general recalled that Tregaskis, one of only two reporters with the marines during their first uncertain weeks on the island, seemed to be everywhere, and the information he acquired was “factual and not a canned hand-out.”

Vandegrift especially remembered that during the height of the fighting for what came to be known as Edson’s Ridge, he could hear through the darkness the sound of a typewriter clacking away. “I asked who could be writing at this time when he could not possibly see the paper,” noted Vandegrift. “Dick spoke up, ‘It’s me, General, I want to get this down while I am still able. Don’t worry about my seeing, I am using the touch system.”

Tregaskis turned his experiences of the often-hellish fighting on the island into a best-selling book, Guadalcanal Diary. Still in print today, the book is one of the best of its kind by modern war reporters for its ability to capture in print a ground’s-eye view of combat and its debilitating effect on the marines. Tregaskis endured the same dangers faced by the troops, including withstanding bombing by Japanese aircraft during the day and shelling from their navy—dubbed the “Tokyo Express”—most nights. The marines also had to deal with inadequate supplies of food and equipment, and the constant fear of being overrun by a single-minded foe.

All these hardships were matched by the difficulties of fighting on the island itself—an often impenetrable jungle that limited vision to just a few yards, jagged mountains climbing to a height of 8,000 feet above sea level, sharp-bladed kunai grass, pesky and venomous insects, dangerous crocodiles, screaming birds, swarms of mosquitos that brought with them tropical maladies that could incapacitate a man for weeks or months, nauseating odors, and hot, humid conditions that bred all sorts of funguses and infections.

Tregaskis’s manuscript outlining his time on Guadalcanal in an easily understood diary format arrived INS offices at 235 East Forty-Fifth Street, New York, without fanfare in early November 1942. It had made quite a journey. The pages had been transported from Fleet Headquarters in Pearl Harbor, Hawaii, via airmail from a young INS reporter, Richard Tregaskis.

Barry Faris, INS editor-in-chief, wrote Tregaskis that he had turned the manuscript over to Ward Greene, executive editor of King Features, owned and operated, as was INS, by newspaper publisher William Randolph Hearst. Faris told his reporter that Greene would make every attempt to get Tregaskis’s manuscript accepted by a book publisher and subsequently serialized in magazines. “I did not have a chance to read it thoroughly as I would have liked,” Faris informed Tregaskis, who would be splitting the revenue from the book fifty-fifty with his employer, “but from what I did see I think you did a magnificent job on it.”

One person who did take the time to read Tregaskis’s writing from beginning to end was Bennett Cerf, cofounder with his friend Donald Klopfer of the New York publishing firm Random House. Greene had distributed copies of the manuscript to nine publishers and asked them to bid for the opportunity to publish the book, a method “that had never been done before,” Cerf noted.

Just the day before he received Tregaskis’s text, Cerf had been talking with his colleagues that the first book that came out about Guadalcanal would “be a knockout because Guadalcanal marked the turning of the tide” in the war in the Pacific, which had been going badly for the Allies since the Japanese had bombed the American fleet at Pearl Harbor in the Hawaiian Islands on December 7, 1941. As the publisher noted, “the dictators were ready and the liberty-loving people were caught unprepared.”

Cerf received the manuscript from King Features on November 11, took it home with him, read it that night, called Greene at nine the next morning, and told him: “I’ve got to have this book.” A pleased Cerf related years later that Random House had signed up to publish the young reporter’s work before “any of the other eight publishers had even started reading it.”

Cerf’s premonition that the American public would be interested in learning more about the marines and their pitched battles with the enemy on a remote island thousands of miles away turned out to be accurate. Rushed into print on January 18, 1943, Guadalcanal Diary became a best seller and the first Random House book to sell more than a hundred thousand copies. Critic John Chamberlain of the New York Times wrote that Tregaskis’s book served as “a tonic for the war-weary on the homefront,” showing, as it did, to the Japanese and those who doubted America’s resolve, that a country “doesn’t necessarily have to love war in order to fight it.”

During his time with the marines on Guadalcanal, Tregaskis carried in his pockets notebooks on which he would write information about what he had seen and experienced. Once he had filled a notebook, he would transfer the information nightly into a black, gilt-edged diary. “The theory and practice was that I could get all the details I needed by referring to the notebook number, 1, or 3, or 4 when and if I could later get to writing a book from my notes,” Tregaskis recalled.

After leaving Guadalcanal via B-17 Flying Fortress on September 25, Tregaskis started writing his book while in Noumea, New Caledonia, where he was waiting for a military transport plane to take him on to Honolulu. When he finally landed in Honolulu, his writing had to be done in the navy offices at Pearl Harbor, going there every morning, working under the censor’s gaze, and watching as his diary was locked in a safe every night; he never got it back and could not find out what happened to it. “And as fast as I could write my manuscript, a naval intelligence officer took my efforts and hacked away with a pencil and a pair of scissors,” Tregaskis reported. “That was the way it was with sharp-eyed military censorship in those days.”

Although a likeable fellow personally, the censor Tregaskis worked with was “stiff as a porcupine when it came to his official duties. He even chopped out a mention of the fact that the Japanese camps usually had a sweetish smell. He apparently felt that if they read my story the enemy might start using a deodorant as a kind of camouflage.”

Unfortunately, Tregaskis later noted that he never got back the black, gilt-edged diary from naval authorities. He did manage to keep some of the pocket notebook. “They are vastly detailed and any comparison of them with the final text of Guadalcanal Diary will show that there are 20 or 40 or 50 facts in this kind of notebook for one which survives in to print,” Tregaskis noted. (For his later works, including his book Vietnam Diary, published in 1963, Tregaskis had evolved into a simpler system—all his notes were written into one large diary book. One benefit of doing so he said was that, because of its size, it was hard to misplace.)

Random House published Guadalcanal Diary on January 18, 1943, and Tregaskis’s work made a steady climb up the best-seller charts, reaching, the publishing company’s advertisements were quick to report, the number-one position on lists compiled by the New York Times and New York Herald Tribune. Sales of the book, which cost $2.50, were boosted by positive reviews from critics across the country, who praised Tregaskis not for his literary flair, but for his factual and honest reporting about what the marines faced in the Solomons.

Years after the war ended, Tregaskis could boast to a friend that his classic book of war reporting had sold more than three million copies, counting all editions and had been translated into twelve languages, including Japanese, Chinese, Spanish, French, and Danish. Its continued popularity bolsters Tregaskis’s belief that among the American ideals, “courage remains the most valuable of all.”