Remember Blowback over Belgium: Will Putin Lose the War of Image?

Robert Toplin is Professor Emeritus at the University of North Carolina, Wilmington, and taught courses at the University of Virginia after retirement from full-time teaching. He has published several books about history, politics, and film. Contact: rt2b@virginia.edu. Website: Presentandpast.com 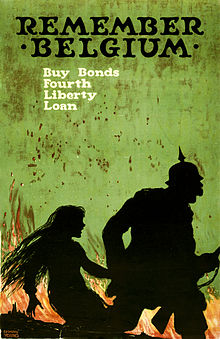 Even though Russia has vast technology available to achieve a quick victory in Ukraine, its attacks could produce more problems than Vladimir Putin expects. Seizing control of the country, occupying it, and suppressing resistance will be a brutal affair. The people of Ukraine can easily record evidence of Russian outrages. Photos and videos can be viewed around the world. Russia may win the battle against Ukraine but lose the propaganda war, much like Germany did when its armies violated Belgian neutrality at the outset of World War I.

Germany’s controversial actions in 1914 severely damaged the country’s global image. News about abuses in Belgium aroused hostility in many countries, including the United States. Stories about violence perpetrated by German troops shocked the world. Soldiers destroyed numerous public buildings in Belgium, set fire to homes, and displaced thousands of inhabitants. Reports about these abuses made Germany look like the war’s rapacious aggressor.

When Germany invaded, the Belgian army as well as angry citizens put up stiff resistance at first. Citizens belonging to underground networks provided intelligence on German troop movements, and some Belgians participated in sabotage. The German army responded violently.

Some of the most disturbing reports of brutality concerned events in the Belgian city of Leuven (a.k.a. Louvain). Panicked German soldiers, worrying about guerilla fighters, mistakenly fired on their own troops. The Germans then massacred Belgians and tossed their bodies in ditches. They killed more than 200 Leuven citizens, exiled thousands to the countryside, and deported about 1500 Belgians to Germany in railway cattle-cars. Troops also burned a university library in Leuven and destroyed 230,000 books. British propagandists characterized these and other actions in the country as the “Rape of Belgium.”

When war began in Europe, many Americans were non-committal. They were pleased to live an ocean away from Europe’s conflicts. President Woodrow Wilson expressed the sentiments of many when he said, “The United States must be neutral in fact as well as name during these days that are to try men’s souls.” But American opinion began to shift in response to reports about bloodshed in Belgium.

Americans became more distrustful of Germany when they learned about the sinking of the Lusitania in May 1915, Germany’s decision to resume unrestricted U-boat attacks in February 1917, and publication of the Zimmerman Telegram in March 1917, a secret proposal Germany offered to Mexico for assistance in the war effort. Also, loans from banks in the United States and American merchants’ trade with Britain and France strengthened ties to the Allies.

Many factors affected public opinion in the U.S, but reactions to German abuses in Belgium were important because they began the shift away from neutrality. After the United States declared war against Germany and the Central Powers in the spring of 1917, the U.S. government tried to arouse patriotic fervor by invoking images of German atrocities. One of the government’s widely distributed propaganda posters showed a German soldier about to violate a young woman. The title was “Remember Belgium.”

Americans today oppose going to war in reaction to the attacks on Ukraine. Leaders in Washington support economic sanctions against Russia instead of direct military engagement. But the brutal assault on Ukraine’s independence, destruction of its cities, and harsh suppression of the population are exciting stronger criticism of Russia in the USA and throughout the world. NATO’s thirty member states, usually loose partners in a fragile coalition, are responding in a more unified way to Russian aggression. Germany’s leaders were at first hesitant about taking a strong stand because of their country’s extensive trade with Russia, but now they are showing resolve.

Vladimir Putin may think there is little to lose and much to gain through military action. He probably believes the assault on Ukraine will enhance his popularity in Russia and burnish his image as a powerful figure on the world stage. Yet even a swift victory in Ukraine could produce unanticipated troubles.

If Russian troops remain in Ukraine, they will face a hostile population. In recent years, many citizens of Ukraine have developed stronger ties with the West. Some locals will participate in guerilla and sniper attacks against the occupiers. Russia’s military will need to employ brutal methods to maintain control. Like German soldiers in Belgium during the First World War, nervous, frustrated, and angry Russian troops will attempt to crush resistance severely.

History is filled with related examples. Atrocities occurred when British troops occupied South Africa during the Boer War and when Japanese troops occupied sections of China before and during World War II. American soldiers reacted harshly, as well. U.S. leaders had to apologize for the My Lai massacre in Vietnam, the Abu Ghraib prison in Iraq, and the mistaken drone strike in Afghanistan that killed ten innocent people, including seven children. Controversial treatment of native populations damaged the global image of occupiers.

Vladimir Putin and his generals would be wise to consult the record of the German armies’ experiences in Belgium now that they have lurched into a war against Ukraine. In a time of vast cyber communications, outrages against civilians by an invading army can be viewed by people throughout the world. Putin and his colleagues may discover the subjugation of Ukraine’s population creates more trouble than they bargained for.