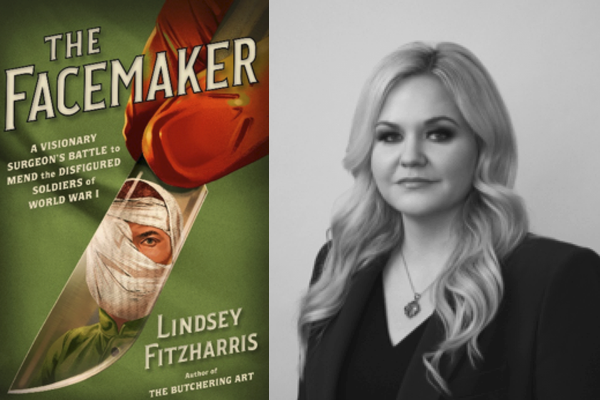 Today in northeastern France, cemeteries and monuments scattered across the rolling green landscape honor the Allied dead of World War 1, but the suffering of the wounded, particularly those with cruelly disfigured faces, has often been ignored or discreetly hidden.

World War 1 produced an astonishing 40 million casualties, including some 10 million military dead and 20 million wounded. The brutality of the war, the first large-scale conflict with machine guns and accurate, rapid firing artillery and poison gas, caught political leaders, generals, and medical and medical authorities by surprise.  Artillery  caused two-thirds of all military injuries and deaths. Soldiers’ bodies, when not entirely obliterated by high explosive shells, were dismembered, losing arms, legs, noses ears and even entire faces. While losing a leg or an arm made a man a hero, a devastating head wound that left him without a nose or jaw made him a pariah, a grotesque object of pity, unfit for society.

By the armistice in November 1918, 280,000 men from France, Germany and Britain alone had sustained some form of facial trauma. At the beginning of the war, no one knew how to treat these horrifying injuries. As one battlefield nurse wrote home, “the science of healing stood baffled before the science of destroying.”

In The Facemaker, Lindsay Fitzharris, a medical historian, reveals the suffering endured by these soldiers and details the accomplishments of Dr. Harold Gillies, a London surgeon who pioneered dozens of plastic surgery procedures. Gillies’ innovative techniques gave thousands of greatly disfigured soldiers a new life, with reconstructed faces that allowed them to return home to their families.

Gillies, born in New Zealand, had graduated from medical school in Cambridge and become a successful ear, nose and throat (ENT) surgeon in London when the war came.

Summoned by the Royal Army, he was charged with treating men with gaping holes in their faces, some missing jaws who had to be fed through a straw.  He soon put together a team of physicians and nurses at Queen's Hospital  outside London where up to a thousand patients could be undergoing treatment.

The word plastic in plastic surgery means "reshaping" and comes from the Greek plastikē. A very primitive form of reconstructive surgery, nose reshaping, was practiced as early as 800 B.C. in India, but relatively few advancements in this specialized field were made for the next 2000 years.

However, by 1914 great progress had been in other areas of medicine. Antiseptic techniques, such as sterilizing wound sites and frequent washing of hands, were standard in British medical facilities (though antibiotics were still in the future).  As the war developed, Allied armies assembled fleets of motorized ambulances and portable triage centers where the wounded could be scanned by X-ray machines.  Blood transfusion, although not perfected, was sometimes administered to those with severe blood loss.

Gillies pioneered the use of multiple skin grafts on the face with the tissue being excised from other parts of the body. He invented the tubed pedicle skin graft, also known as the walking-stalk skin flap, in which the skin for the target site is folded into a flap and attached at both ends to preserve the blood supply. Gillies’ team also pioneered the epithelial outlay technique, which enabled a new set of eyelids for those who had them burned off. The physicians at Queen’s Hospital also introduced new techniques in anesthesia and blood transfusion.

Gillies, concerned about the psychological health of his patients, encouraged the visits of family members and provided training programs for those soldiers who left the hospital with disabilities.

A long recitation of medical procedures can get boring, and Fitzharris skillfully weaves in stories of the young men who were wounded on the battlefield and were fortunate enough to make to the London hospital.

Private Percy Clare was advancing at the Battle of Cambrai in 1917 when a bullet passed through his cheek ripping a large hole in the left side of his face. Blood gushed down his tunic and he collapsed on the ground, as the battle raged around him. A medical orderly came by, and eyeing the large head wound and pools of blood, muttered “that sort always dies soon” and moved on. After hours passing in and out of consciousness, Private Clare was recognized by a friend, who promised to get help. More hours passed as the friend tried to locate a team of stretcher-bearers who would venture out to help Clare. Finally, he was rescued and eventually returned to England, where he underwent a series of operations at Queen’s Hospital, which Dr. Gillies ran. After several hospital stays and painful recuperation he was discharged from the army in 1918 and returned to his wife and son. He died in 1950, age sixty-nine.

By the end of the war, Gillies and his colleagues had performed more than 11,000 operations on some 5,000 patients. In 1920 he published a book Plastic Surgery of the Face, which became an essential textbook for surgeons in many nations

In World War II, Gillies was again called upon by the British government and organized plastic surgery units at a dozen hospitals. Gillies continued to pioneer plastic surgery techniques. In 1946, he one performed on of the first sex reassignment surgeries from female to male on  Michael Dillon (born Laura Dillon). In 1951, he headed a team that completed a male-to-female reassignment surgery.

For American readers, one disappointment will be absence of any discussion of the American Expeditionary Force and its medical corps. Fitzharris, who holds a doctorate in the history of science and medicine from the University of Oxford, naturally focuses her research on archives in the U.K.

World War 1 was a world-shattering disaster that ended in an uncertain peace.  As Robert Kirby, a historian at Keele University, observed “Nobody won the last war but the medical services. The increase in knowledge was the sole determinable gain for mankind in a devastating catastrophe.”