Our Brain Dislikes Disorder.  That Explains a Lot.

Rick Shenkman is the editor of the History News Network. His newest book is Political Animals: How Our Stone Age Brain Gets in the Way of Smart Politics (Basic Books, January 2016), from which this article is excerpted.

Think back on all the big events of the last generation that made us feel bad: 9/11, the Iraq War, Hurricane Katrina. Each time, people by the millions were drawn to conspiracy theories. Deciding to go down that path is usually irrational, but once we do, everything makes sense. The reason is that we settle on conspiracies that build on an existing base of knowledge and worldviews. They don’t just come out of nowhere. Thus, people accustomed to finding answers in religion see the hand of God in catastrophe. What is it the right-wing Christian leader Jerry Falwell said after terrorists brought down the World Trade Center towers on 9/11? “The abortionists have got to bear some burden for this because God will not be mocked. And when we destroy 40 million little innocent babies, we make God mad.” Falwell believed God had plotted against us. God. It doesn’t get much clearer than that. You piss off God and he smites you.

It is not bad news per se which drives us crazy enough to embrace wild theories. It is bad news that undermines the order of our universe. We abhor disorder and uncertainty. Think about our reaction to George W. Bush in the months following 9/11. What did he offer? Certainty. And Americans by the millions rallied behind him. In those terrible, grief-stricken, frightening months, Bush sustained the highest ratings of any president in our history: 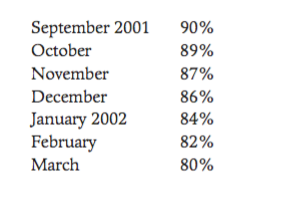 Later, Bush may have proved to be deeply flawed as a leader. But in those months he gave people what they wanted and needed. The man and the moment met.

Biology reinforces our belief in order. Consider how our vision system works. We think of vision as objective. It’s actually subjective. We don’t actually see what we think we see. Our brain doesn’t shoot documentaries, cinema verité-style. It’s Hitchcock. It shoots movies. It assembles its movie from thousands of parcels of visual information. These parcels, says the neuroscientist John Medina, are “ridiculously specific.” A vertical line at 40 degrees is picked up by one parcel, while another picks up a vertical line at 43 degrees. What we think we are seeing—a seamless movie—is actually a rough director’s cut, sliced, and diced in such a way as to give us in the end the illusion of a sensible representation of the world we see. But it’s not the real world. If the brain showed us the world it’s photographing, we would see a herky-jerky little movie as abstract as a Picasso painting. We’d see the frames of the movie rather than the flow. And everywhere we went we’d see two little black dots. Where the optic nerve connects to the retina in the back of the eye, there’s a blind spot, one in each eye. But we don’t notice them. The director, our brain, doesn’t want his movie spoiled by dots, so he fills them in. When the movie debuts, we see a world we can navigate easily.

Our brain doesn’t let us see the director’s cut because it wouldn’t serve any purpose. And it would be upsetting. Our brain doesn’t want us upset. It wants us to feel in control. As much as it can, it discounts that which might lead us to believe we are not in control. It deliberately blinds us.

This is extraordinary when you think about it. Evolution has given us a lot of highly effective tools to arrive at a representation of the world that is truthful. We see the world in 3D at a speed of twenty-four frames per second. We can distinguish among 120 different levels of loudness, from the faint sound of a snail moving quietly along a garden path to an ear-shattering rock-and-roll concert. We can detect up to ten thousand different odor molecules. Our cognitive powers are sufficiently developed that we have figured out how to split the atom and send a man to the moon. But if the truth is messy, we run from it? We prefer a wrong-headed conspiracy theory to the truth? That appears to be the case. We are like the character played so memorably by Mary Tyler Moore in the film Ordinary People. We want our spoons lined up perfectly. We hate mess.

When we go to the grocery store and walk down the cereal aisle, we face literally hundreds of choices. Why do we often reach for a name brand cereal, even though a generic costs less and probably tastes the same? Because, say social scientists, we like no more than three choices. More than that and we grow anxious. That’s why so many of us go for Frosted Flakes or Cheerios. Picking those cereals is a way of reducing our anxiety. It takes the mess out of shopping.

Our preference for order is so pronounced that we often turn to name brands we’re accustomed to even when blind taste tests show we prefer an alternative. In blind-taste tests Pepsi is usually favored or at least draws even with Coke. But Coke far outsells Pepsi and when people in experiments are told they are drinking Coke, three out of four say they prefer it.

Economists like to think we are rational creatures and that we act in our self-interest. They even have a name for us that reflects our allegedly rational, utility-maximizing nature: homo economicus. But our capacity for rationality is exaggerated. That’s particularly true when it comes to politics.