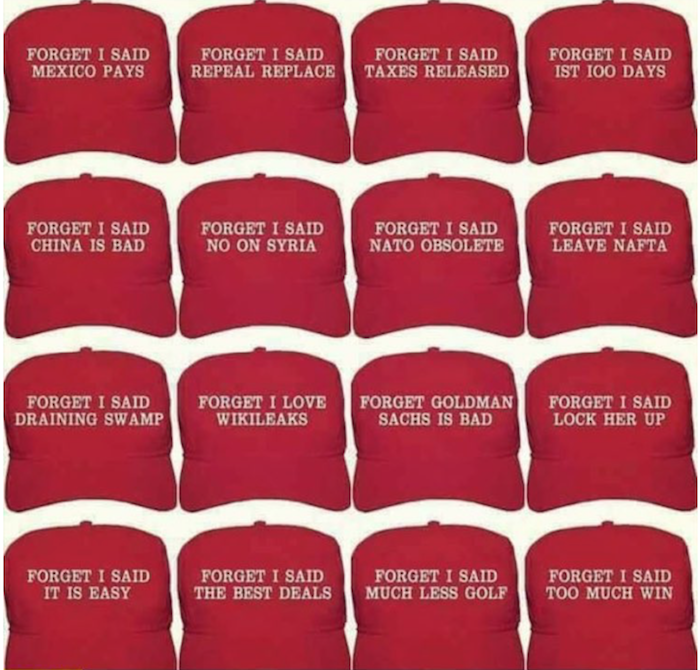 Rick Shenkman is the publisher of the History News Network and the author of Political Animals:  How Our Stone-Age Brain Gets in the Way of Smart Politics, from which this article was adapted. You can follow him on Twitter. He blogs at stoneagebrain.

Why don't Trump voters seem to care that their president is frequently caught telling lies?  To answer this question I want to start with a story.

Not long after the Watergate burglary, the Republicans held their national convention in Miami to nominate Nixon for reelection. After he gave his acceptance speech, delegates and supporters in the hall were allowed to meet the president, who stood on stage as people, one by one, passed by to shake his hand. In the long line that immediately formed was a young man, all of seventeen years of age, from New Jersey. He had come to Miami without a ticket to the convention, but he had managed to wangle one that afternoon. “Mr. President, I’m a Democrat,” the young man said when he got his turn. “But I am supporting you.” Nixon looked a little flummoxed. Even though he was courting Democrats, he apparently wasn’t expecting to be shaking hands with one at this point in the proceedings of the Re- publican convention.

That fall the young man went off to Vassar College, a bastion of liberalism. There he encountered students who despised Nixon. As the Watergate crisis unfolded they repeatedly piled argument upon argument based on well-established facts showing that Nixon was lying and covering up. Can you guess what happened? It will probably not come as a surprise that the young man continued backing Nixon. In defiance of the school consensus, he stuck with Nixon through 1972 and 1973. Active in local New Jersey politics, he joined a pro-Nixon group, the local chapter of the Committee to Save the Presidency. He quickly was elected its vice president. Through the Watergate hearings, the Saturday Night Massacre (in which Nixon abused his power to have special prosecutor Archibald Cox fired), and all the rest, he stood by Nixon. Not until June 1974—little more than two months before Nixon resigned—did he finally become convinced that Nixon had been lying.

For years afterward that young man wondered why he had been so slow to face the truth. It haunted him. I should know. The seventeen-year-old student was me. The media had done their job. I had kept up on the news and watched the Watergate hearings attentively. And still I stuck with Nixon?

We shouldn’t be surprised to learn that people don’t like to face facts when those facts contravene their opinions. It’s right there in the most hallowed papers produced by the Founding Fathers, the Federalist Papers. In “Federalist No. 10,” the most celebrated of all the essays, James Madison observes: “As long as the connection subsists between his reason and his self-love, [man’s] opinions and his passions will have a reciprocal influence on each other; and the former will be objects to which the latter will attach themselves.” In other words, we love our own opinions because we love ourselves. And if those opinions conflict with the facts? We’ll choose our own opinions.

But Madison did not quite grasp the mechanism in play here. As Harvard’s Daniel Gilbert points out, we think we are right and others are wrong not because we love our own opinions but because we want to be right. Studies show that people who think they are right all the time do better in life. They suffer from less stress and enjoy better health. This is a critical factor in what he calls our psychological immune system.

Furthermore, we don’t hold all of our opinions with equal fervor. We make distinctions. We hold some opinions more dearly than others. Psychologist Elliot Aronson demonstrated this in a famous study. Aronson recruited students—all women—to join a purportedly hot discussion group that promised to delve into the mysteries of sex. But before they could join they had to undergo an initiation rite. For some the rite was fairly innocuous. They had to read aloud a list of words with a sexual connotation, such as prostitute, virgin, and petting. The others went through a much more difficult rite. They had to say aloud in a public setting a dozen obscene words, including fuck, cock, and screw. This was in the 1950s. You can imagine how mortifying this was. Following their initiation, all of the women were allowed to join the discussion, which was already in progress. But when they did, they discovered this wasn’t the fun and somewhat daring group they had been led to expect. The subject wasn’t human sexuality, it was lower-order animal sexuality. And the other participants (confederates of the researcher) were dull. They spoke in a halting fashion and muttered. You could barely follow the conversation. What had promised to be an interesting experience turned out to be a deadly boring one. Afterward, the students were asked if they liked the group. Which ones would you guess said they did? It wasn’t the women who had gone through the easy initiation. It was the ones who had been required to read swear words out loud, an experience that had left them embarrassed.

You would think the ones who went through the more troublesome initiation rite would be more upset and therefore more likely to denounce the group. They had a legitimate grievance. They had been conned into joining a group that wasn’t what it was cracked up to be. Instead, they defended it. The explanation is really quite simple. Unlike the other young women who had gone through the easy initiation rite, they had gone through something of an ordeal. They couldn’t just write off the experience with an Oh Well. Saying swear words aloud in a public setting had been traumatic. At the end of the experiment they faced a classic moment of cognitive dissonance. On the one hand, they believed themselves to be smart. On the other, they knew that joining the group had been dumb. This left them in a tough spot. They could either admit to themselves that they weren’t as smart as they thought they were, or they could maintain that the group actually lived up to its billing. How would you respond?

What Elliot Aronson’s study proved was that cognitive dissonance isn’t an equal opportunity phenomenon. Contrary to James Madison, we are not likely to defend all of our own opinions in the face of the facts. We are only likely to insist on our opinions when they involve our own feelings of self-worth. When a decision we make is a referendum on our status as a good and smart person, we are much more inclined to justify it. (The analysis is known as Justification Theory.) Under which circumstance is that likely to happen? When our holding an opinion comes at a cost, as mine did when I defended Nixon at liberal Vassar. As psychologist Carol Tavris puts it, the “more effort we put into something that turns out to be useless or harmful or just plain boring,” the more we have to reduce the dissonance we feel— our conviction that we’re smart and the reality that we “just put a whole lot of time, money, and effort into something that isn’t worth it.” The way we do that is by doubling down, defending our original decision to the hilt. That’s what I did at Vassar. After a time the fight I was waging for Nixon wasn’t about Nixon at all; it was about me.

It’s no mystery, then, why voters postponed the day of reckoning as long as they could after the Watergate burglary. They couldn’t abandon Nixon without indicting themselves. The election had ostensibly been a referendum on Nixon. But once people decided to support him it was a referendum on them too. For them, Watergate wasn’t really about Nixon at all. It was about them. The more they defended Nixon, the more of a stake they had in his survival.

Politics is always about the voters. It’s about how they feel. That is so obvious I hesitate to say it. But it’s easy to forget. When a politician is about to go on camera, what does he do? He straightens his tie and combs his hair. The assumption he makes—and that we often make—is that an on-camera appearance is about the candidate. Actually, it’s not. It’s not about how he performs or looks or talks. It’s not about how articulate he is. It’s about how the people on the other end of the camera feel in his presence. Does he make them feel dumb or smart? Does he leave them feeling optimistic or pessimistic? Whether every hair on his head is in place or whether he chooses his syntax right does not really matter.

What this research suggests is that the darts thrown at Trump for his lies are hitting his voters as well as him. The polls are a referendum on them now, not just him.  We shouldn't be surprised that they're reluctant to call him out on his lies.  That would be like admitting they themselves had been duped. Who wants to admit that?