Kids Are Learning to be Leftists in Public Schools by Historians with an Ax to Grind?

Adam Laats is an historian in the Graduate School of Education at Binghamton University (SUNY).  He is the author most recently of The Other School Reformers: Conservative Activism in American Education (Harvard University Press, forthcoming Fall 2014).  He blogs about conservatism and American education at I Love You but You’re Going to Hell. 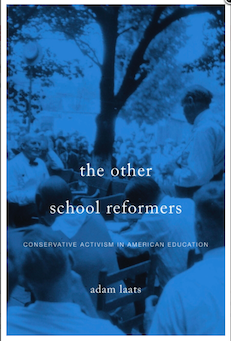 The real victims of American history, some pundits claim, are not enslaved Africans or brutalized Native Americans.  Rather, the real victims are the children of defenseless patriots, taught in public schools to hate America.

In Dinesh D’Souza’s new film America: Imagine the World without Her, we see a new example of this puzzling tradition.  Time after time, conservative activists assume that the teaching of American history has been taken over by America-hating leftists.  Why do so many conservatives insist they are losers in America’s schools, when they could just as easily call themselves the winners?

D’Souza isn’t the first conservative educational activist to make the assumption that America’s schools have been taken over by leftists.  Writing after a bruising controversy in 1950 Pasadena, conservative leader Mary Allen explained her version of events.  Ever since the 1930s, Allen described, “some of Dewey’s followers prepared to use the schools to introduce a new social order.”  Such schools, Allen thought, taught watered-down history.  They taught students that a socialist revolution was the only way to move forward.  Instead of teaching children the heroic tales of George Washington and Sacagawea, “progressive” teachers peddled only “living democracy in a group,” Allen complained.

More recently, conservative writers have continued with this assumption.  Fundamentalist blockbuster author Tim LaHaye warned in a 1987 book that the United States had suffered a “Deliberate Rape of History.”  There had been an intentional “distortion of history in the state-approved textbooks,” LaHaye insisted.  As a result, children learned a false, left-leaning history.  The problem, LaHaye believed, was that the “all-pervasive antimoral values of secular humanism . . . [had] replaced traditional American moral values in many of our public schools.”  Students no longer learned real history, but only the secular leftist garbage preferred by progressive educators.

This attitude was not limited to fundamentalists and Pasadena PTA members.  Perhaps most famously, an attempt at crafting national history standards was scuppered in the 1990s when conservative politicians got wind of it.  A group of high-powered historians, teachers, and academics had gathered to draft the new standards.  Spearheaded by Lynne Cheney, conservatives attacked the standards as woefully leftist and inadequate.  Conservatives claimed the new standards did not teach young people enough about George Washington, Thomas Jefferson, or Ben Franklin.  Instead, students were told that America was founded on genocide and rape.

It looks as if D’Souza continues this tradition.  As have other conservatives, D’Souza seems to assume that American schools are teaching some sort of leftist progressive history.  As John Fund writes in a friendly review in National Review Online, most people will likely walk away from the film with one conservative-pleasing idea: “Much of the criticism of America taught in the nation’s schools is easily refuted.”

In this conservative vision, the supposed progressive takeover of America’s schools has had a woeful effect on the teaching of American history.  Students are taught to hate their country.  Crime is the theme of America’s founders.

But is that story really taught in American schools?

After nearly twenty years of teaching history at various levels, I just don’t see it.  Most teachers are struggling to give kids the basics.  Great teachers are helping kids read complicated documents and weigh contradictory evidence.  For most of the teachers I’ve seen, the worst teaching comes not from leftism, but from laziness.  But even that is only in a few cases.  The overwhelming majority of teachers go to extraordinary lengths to help their students know and understand history.  Not “left” history, not “right” history, but a more complex task of engaging in what Sam Wineburg calls the “unnatural act” of thinking historically.

So why do conservative pundits consistently claim that school history is dominated by the left?  Why do they insist that the real victims are not ethnic minorities, but patriotic, conservative Christians?  It would make sense, instead, if they trumpeted their own long-term influence.  As I argue in my upcoming book, historically conservatives have exerted a good deal of control over the sorts of history taught in America’s public schools.

For example, in the late 1930s conservative activists in the American Legion successfully blocked the use of left-leaning social-studies books.  Harold Rugg’s series of textbooks really did hope to teach students a critical view of American institutions.  They sold hundreds of thousands of copies in the 1930s.  But when the American Legion and their conservative allies began a campaign to ditch the Rugg books, sales plummeted.

We could list many more examples.  In the 1940s, California conservatives blocked the use of the Building America series of textbooks.  And throughout the 1970s and 1980s, Texas textbook activists Mel and Norma Gabler pushed Texas toward more conservative books.

As historian Jon Zimmerman has argued, conservatives don’t win every battle.  But the notion that they have somehow been shut out of public schools by a scheming and dictatorial leftist elite just doesn’t match the historical record.

So why have so many conservatives said what D’Souza says in his new movie?  Why do conservatives insist time and again that kids are learning an America-hating leftist history?

The most obvious explanation is simple politics.  Who will get mobilized to political action if someone tells them everything is fine?  Who will sign petitions and attend rallies if they believe things are okay?  Rather, it is the job of pundits like D’Souza to get people riled up.  And few topics get conservatives more riled up than the notion that kids are learning to be leftists in public schools.