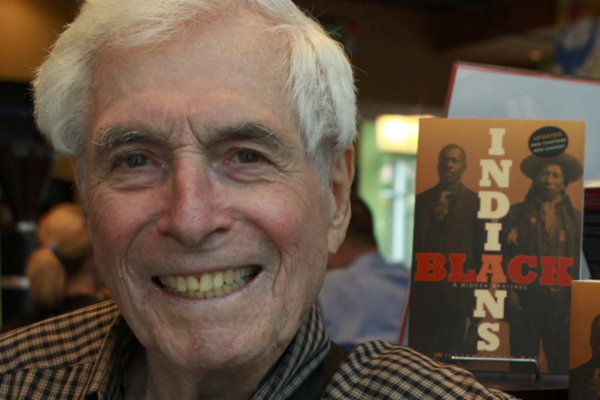 William Loren Katz, historian who championed the marginalized, died on October 25, 2019. He was 92 years old. Bill, who is survived by Dr. Laurie Lehman, his wife and partner of 36 years, was the father of Naomi and Michael, proud grandfather of Maya, and lifelong friend of Dr. Virginia Shipley. He is also survived by a legacy that comprises the forty American history books that he authored including Black Indians, The Black West [a revised edition was published this year], and Breaking the Chains: African-American Slave Resistance. As the series general editor, Bill oversaw the publication of over 200 edited volumes from The American Negro: History and Literature, and The Anti-Slavery Crusade in America series published by the New York Times and Arno Press.

I “met” Bill three times and it wasn’t until the third time that I realized who he was. As a graduate student in the 1970s, I was aware that William L. Katz was the general editor of The American Negro: History and Literature series. As a high school United States history teacher in the 1980s, an important source was an edited collection of primary source documents, Eyewitness, The Negro in American History by the same William L. Katz. Later, my wife worked with Bill’s wife. After a visit to their Greenwich Village apartment and seeing Bill’s bookshelves, I realized my friend was The William L. Katz. Bill was always generous with his time and helped me with research for the New York and Slavery Complicity and Resistance curriculum and two books.

Bill was born in New York City and entered the United States Navy in 1944 at the age of 17, right after graduating from high school, so he could join the fight against Fascism. After the war he used his GI Bill benefits to study history at Syracuse University (BA History, 1950) and education at New York University (MA Secondary Education, 1952). He then taught in New York City and State public schools for fourteen years. As a historian and educator, Bill was a consultant on numerous projects and worked with the U.S. Senate, the British House of Commons, the Smithsonian Institution; and a number of school districts.

Bill never separated his work as a historian from teaching and activism. He was especially proud of his anti-Apartheid activism in the 1980s, his work with WBAI-FM radio, and his support for Black Lives Matter. Bill co-authored a picture history about the Abraham Lincoln Brigade for young adult readers and was a strong supporter of their veteran organizations. He wrote books about Black Cowboys and Black Indians and advocated for the rights of indigenous people, which led to him receiving the White Dove Imani Peace Award from the White Dove-Imani-Rainbow Lodge of Ohio. Bill received a lifetime achievement award from the Institute of African American Affairs of New York University and in 2012, a National Underground Railroad to Freedom Award from the National Park Service.