Transgender Youth Have Doubters. They Also Have History

Pax Attridge is Graduate Student in the Cal State Los Angeles History department, where she focuses on US and Southwest Trans History. She is also an instructor in the Communication Studies Department and Director of the university's Forensics Speech and Debate Team. 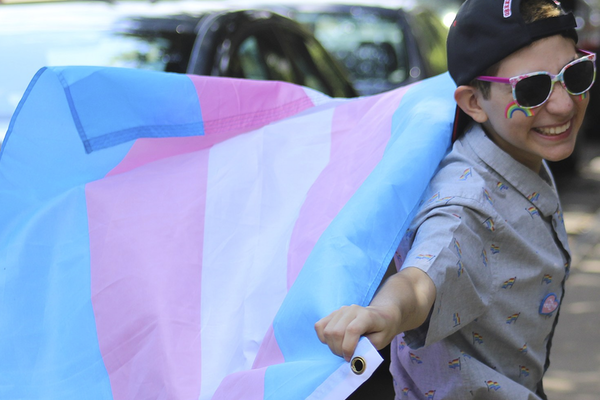 Politicians and pundits decrying the “trend” of transgender children currently dominate American airwaves. From Matt Walsh’s documentary What is a Woman? to proponents of state restrictions on gender-affirming healthcare, political and cultural debates in 2022 consistently entertain the argument that trans children are coming out of the blue, with no historical precedent. These talking points are not new; historically speaking, neither are trans youth.

On April 12, 2022, the Los Angeles Times published an article under its “World and Nation” section - not the Opinion section - interviewing the ex-president of the World Professional Association for Transgender Health (WPATH), Dr. Erica Anderson. In her remarks, Anderson argued that increasing rates of transition-related medical care—hormone replacement therapy, gender-affirming surgery, and psychological care—are a product of the “popularity of alternative identities,” and “peer pressure.” As Anderson, herself a California-located psychologist and trans woman, states, “I think it’s gone too far [...] A fair number of kids are getting into it because it’s trendy.”

Anderson is not the first (or only) medical practitioner, let alone trans one, to critique this phenomenon, referred to in viral Twitter threads and TikTok videos as “transtrendiness.” But arguments like these aren’t just fueling medical gatekeeping; they’re historically missing the point. Anderson’s claim that trans numbers today are an “increase” demonstrates the holes in her trans history. To argue that trans youth rates are “on the rise” would require prior rates to have not been artificially depressed to an unknowable degree. “On the rise” is a comparison to history—a comparison that ignores the trans children whose existences can be charted both within and outside of medical records.

As trans historian Jules Gill-Peterson details in a 2018 monograph Histories of the Transgender Child, trans youth, and trans populations in general, did not suddenly start existing en masse in the 1980s. Sixty years before Anderson’s interview, a young trans woman named Agnes stole her mother’s estrogen tablets to prove to the University of California-Los Angeles’s Gender and Sexuality Clinic that she would do anything for treatment—a story detailed in this year’s Sundance documentary Framing Agnes.  Later that decade, the families of transgender children petitioned Johns Hopkins Medical School to create its own clinic. Even earlier, trans youth were given access to the restrooms that matched their gender presentation—and were accepted by their community in the process—decades before Republican lawmakers would stake their political hopes on the “transgender threat.”

Not all trans childhoods can be found in medical archives. As Gill-Peterson’s research explores, some trans individuals avoided interaction with the medical industry entirely; underground queer and trans communities played chemist with DIY hormone treatment. Others more surreptitiously navigated medical intervention and didn’t become national headlines. Many, many more were denied treatment by prominent, seemingly-sympathetic gender clinic staff at USC, Johns Hopkins University, or other facilities. Many trans childhoods in the 20th century ended in suicide notes.

In all likelihood, Dr. Anderson has not read every book, seen every movie, or learned every historical nuance of US trans history—that field of study is dense, and, all too often, incredibly bleak. She likely has her own timeline of trans history—the national coverage of Christine Jorgenson’s landmark sexual reassignment surgeries in the early 1950s, the HIV/AIDS crisis, and the comparatively greater access to trans resources in the last decade that allowed Anderson herself to come out and transition four years ago, at the age of 59. There’s no reason Anderson would be an expert on the history of trans youth, having approached transition from the material realities of a wealthy doctor and not as a child with fewer medical rights under law.

Texas, Florida, and Californian psychologist Erica Anderson overlap not in their position on the moral permissibility of trans existence, but on their rhetoric that trans youth today are being influenced by social media, and are not properly thinking through the ramifications of “life-altering procedures.” When Anderson, conservatives, and those whipped into moral frenzies call trans youth a trend, they issue warnings that, unintentionally but importantly, overlap.

But modern conservatives did not invent this strategy. Detailing the case of an anonymous child denied hormone replacement therapy multiple times (after multiple gender dysphoria diagnoses) on the basis that the child might regret the choice later, trans historian Jules Gill-Peterson describes the strategy behind delaying medical intervention in order to gatekeep and ultimately deny it: “Keep deferring until there is nothing left to defer.”  Without historical context, trans children will continue to be treated as modern-day anomalies, and the deferral will continue.