The Magnificent History of the Much-Maligned Fruitcake

Jeffrey Miller is an Associate Professor of Hospitality Management at Colorado State University. 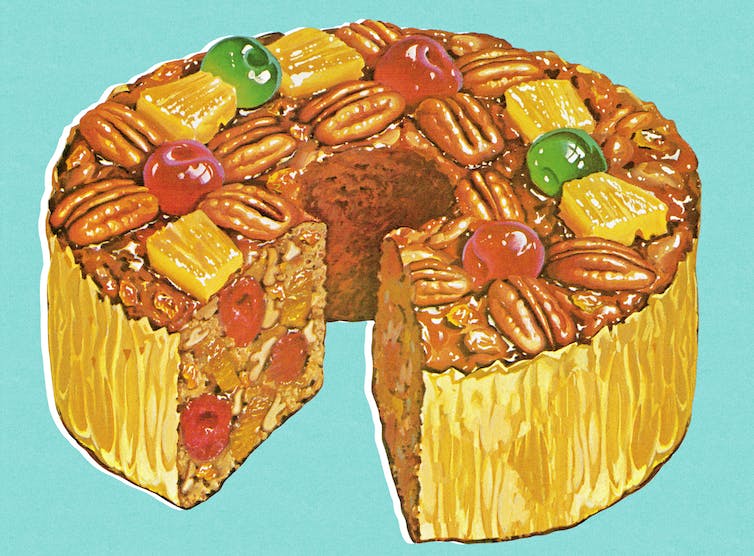 Fruitcakes are known for their legendary shelf life. CSA-Printstock via Getty Images

A quip attributed to former “Tonight Show” host Johnny Carson has it that “There is only one fruitcake in the entire world, and people keep sending it to each other.”

Two friends from Iowa have been exchanging the same fruitcake since the late 1950s. Even older is the fruitcake left behind in Antarctica by the explorer Robert Falcon Scott in 1910. But the honor for the oldest known existing fruitcake goes to one that was baked in 1878 when Rutherford B. Hayes was president of the United States.

What’s amazing about these old fruitcakes is that people have tasted them and lived, meaning they are still edible after all these years. The trifecta of sugar, low moisture ingredients and some high-proof spirits make fruitcakes some of the longest-lasting foods in the world.

Fruitcake is an ancient goody, with the oldest versions a sort of energy bar made by the Romans to sustain their soldiers in battle. The Roman fruitcake was a mash of barley, honey, wine and dried fruit, often pomegranate seeds.

What you might recognize as a modern-style fruitcake – a moist, leavened dessert studded with fruits and nuts – was probably first baked in the early Middle Ages in Europe. Cinnamon, cloves and nutmeg were symbols of culinary sophistication, and these sweet spices started appearing alongside fruit in many savory dishes – especially breads, but also main courses.

Before long, most cuisines had some sort of fruited breads or cakes that were early versions of the modern fruitcake.

Fruitcakes are different in Europe than they are in America. European fruitcakes are more like the medieval fruited bread than the versions made in Great Britain and the United States. The two most common styles of fruitcake in Europe are the stollen and panettone. 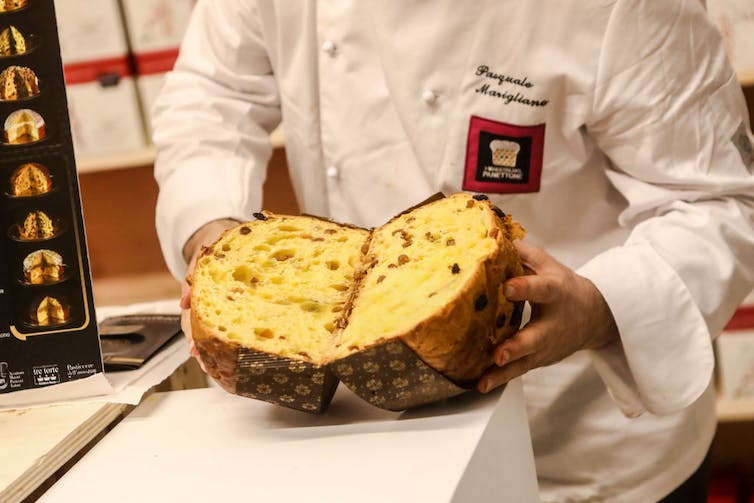 Panettone is one of the most popular fruitcakes in Europe. Mairo Cinquetti/NurPhoto via Getty Images

British and American versions are much more cakelike. For over-the-top extravagance, honors have to go to a British version that crowns a rich fruitcake with a layer of marzipan icing.

Fruitcakes came to America with the European colonists, and the rising tide of emigration from Britain to New England closely mirrored an influx of cheap sugar from the Caribbean.

Sugar was the key to preserving fruit for use across the seasons. One of the favorite methods of preserving fruit was to “candy” it. Candied fruit – sometimes known as crystallized fruit – is fruit that’s been cut into small pieces, boiled in sugar syrup, tossed in granulated sugar and allowed to dry.

Thanks to this technique, colonists were able to keep fruit from the summer harvest to use in their Christmas confections, and fruitcakes became one of the most popular seasonal desserts.

A dessert with staying power

Fruitcakes were also popular due to their legendary shelf life, which, in an era before mechanical refrigeration, was extremely desirable.

Fruitcake aficionados will tell you that the best fruit cakes are matured – or “seasoned” in fruitcake lingo – for at least three months before they are cut. Seasoning not only improves the flavor of the fruitcake, but it makes it easier to slice.

Seasoning a fruitcake involves brushing your fruitcake periodically with your preferred distilled spirit before wrapping it tightly and letting it sit in a cool, dark place for up to two months. The traditional spirit of choice is brandy, but rum is also popular. In the American South, where fruitcake is extremely popular, bourbon is preferred. A well-seasoned fruitcake will get several spirit baths over the maturation period.

Credit for the fruitcake’s popularity in America should at least partially go to the U.S. Post Office.

The institution of Rural Free Delivery in 1896 and the addition of the Parcel Post service in 1913 caused an explosion of mail-order foods in America. Overnight, once rare delicacies were a mere mail-order envelope away for people anywhere who could afford them. 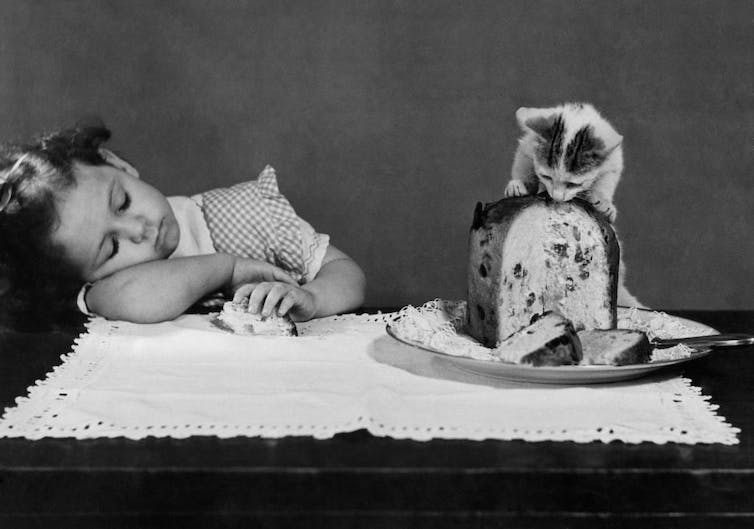 Some people (and animals) are more enthused by fruitcakes than others. Touring Club Italiano/Marka/Universal Images Group via Getty Images

Given fruitcake’s long shelf life and dense texture, it was a natural for a mail-order food business. America’s two most famous fruitcake companies, Claxton’s of Claxton, Georgia, and Collin Street of Corsicana, Texas, got their start in this heyday of mail-order food. By the early 1900s, U.S. mailrooms were full of the now ubiquitous fruitcake tins.

[Over 140,000 readers rely on The Conversation’s newsletters to understand the world. Sign up today.]

As late as the 1950s, fruitcakes were a widely esteemed part of the American holiday tradition. A 1953 Los Angeles Times article called fruitcake a “holiday must,” and in 1958, the Christian Science Monitor asked, “What Could Be a Better Gift Than Fruitcake?” But by 1989, a survey by Mastercard found that fruitcake was the least favorite gift of 75% of those polled.

Haters and disrespect aside, fruitcake is still a robust American tradition: The website Serious Eats reports that over 2 million fruitcakes are still sold each year.