Again, Russia is at the Center of an American-Backed War for Democracy

James D. Robenalt is the author of four nonfiction books, including The Harding Affair, Love and Espionage During the Great War. 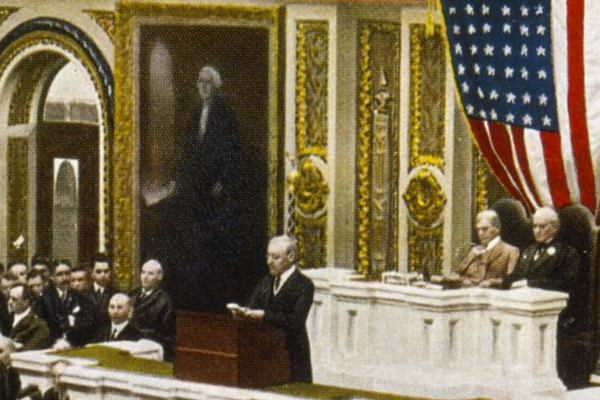 The idea of America making the world safe for democracy is now just over a hundred years old. Then as now, Russia is at the heart of the controversy.

The United States joined the Great War in April 1917, after a long struggle by President Woodrow Wilson to keep the nation “neutral in thought as well as deed.” Wilson in fact ran for and won reelection in 1916 on the slogan “He kept us out of war!” But just months later, when Germany declared the resumption of its brutal and unrestricted submarine warfare, the pressure for America to take sides became insurmountable.

Yet there was one event, not well understood, that finally allowed the idealistic president to call Congress to a special session to ask for a declaration of war against Germany, and that event took place in Russia. On March 15, 1917, Tsar Nicholas II abdicated in the face of military defections and army mutinies, political unrest, bread riots, and labor strikes mainly in the Russian capital of Petrograd (today St. Petersburg), brought on by the privations and losses of a war that Russia helped to trigger in August 1914.

President Wilson’s low-key Secretary of State, Robert Lansing, had been pressing Wilson for months to react to Germany’s war on the seas by supporting the Allies, which included Great Britain, France, and Russia. And that was the problem—Wilson’s high-minded idea to make the war about something other than commercial disputes or territorial gains persistently ran into a conundrum. How could the Americans transform the war into one about making the world safe for democracy when one of the Allies included the autocratic Russia?

For over three-hundred years, the Romanov Tsars had ruled Russia, greatly expanding the empire. But as with any roll of the hereditary dice, the family had become increasingly weakened and corrupt. After early successes in the war, the Russian war machine faltered, and the nation’s backward economy began to collapse. During the truly pitiless winter of 1916-17, the Russian people wanted bread and peace—and revolution.

Secretary of State Lansing saw his opening to convince a vacillating Wilson that the sudden demise of the Russian ruler and his replacement with a provisional government that looked like a democracy, led by a nobleman and social reformer, Prince Georgy Lvoff, as its premier, was the opening for the U. S. to enter the war. Lansing spoke out on March 20, 1917, five days after the Tsar stepped down.

Wilson invited ten men to join him at the White House at 2:30 PM on that Tuesday. Later that day, Lansing penned a long memorandum setting forth his recollections of a Cabinet Meeting that he termed “the most momentous and, therefore, the most historic of those which have been held since I became Secretary of State.” Just days earlier, German submarines had sunk three U. S. merchant ships without warning, resulting in at least 15 drowned. The president asked each man to express his opinion on the question of war.

Wilson was cool and detached despite the tremendous stakes at play. “Composure is a marked characteristic of the President,” Lansing observed. “Nothing ruffles the calmness of his manner or address. It has a sobering effect on all who sit with him in counsel. Excitement would seem very much out of place at the Cabinet table with Woodrow Wilson presiding.”

When it came time for Lansing to speak, he focused on events in Russia. “I said the revolution in Russia, which appeared to be successful, had removed the one objection to affirming that the European War was a war between Democracy and Absolutism,” Lansing wrote. Lansing felt that the “only hope of a permanent peace between all nations depended upon the establishment of democratic institutions throughout the world” and that “no League of Peace would be of value if a powerful autocracy was a member, and that no League of Peace would be necessary if all nations were democratic.”

Equally important, Lansing thought that recognition of the Russia democracy might “encourage the democratic movement in Germany,” possibly leading to the overthrow of the German Kaiser.

The president was noncommittal, leaving all unsure what he would do if he called a special session of Congress.

But Lansing’s campaign to make the war about democracy stuck with the president. Two days later, the United States became the first nation to recognize the provisional government in Russia.

And when Wilson spoke to Congress on April 2, he gave full-throated support to the idea that the war was necessary to protect democracy. “The world must be made safe for democracy,” he asserted. Events in Russia supported his decision to take a stand. “Does not every American feel,” he asked, “that assurance has been added to our hope for the future peace of the world by the wonderful and heartening things that have been happening within the last few weeks in Russia?” He argued that the true Russian character had always been “in fact democratic at heart.” The autocracy “that crowned the summit of her political structure,” he argued, was not “in fact Russian in origin, character, or purpose.”

In a similar way, he told the German people that the United States had no quarrel with them; it was their leadership that had poisoned the people and brought about the destructive war that was ruining Germany and indeed all of Europe. “It was not upon their impulse that their government acted in entering this war,” Wilson said of the German people. “It was a war determined upon as wars used to be determined upon in the old, unhappy days when peoples were nowhere consulted by their rulers and wars were provoked and waged in the interest of dynasties or of little groups of ambitious men who were accustomed to use their fellow men as pawns and tools.”

In the chaos of war, Russia’s democracy failed quickly. By the fall of 1917, the Bolsheviks had taken power, returning Russia to an authoritarian form of government.

Woodrow Wilson’s reputation has come under severe and justified criticism recently for his deplorable ideas about race. He segregated the federal government after reforms had been instituted by his predecessors. He held a special showing of the vile, racist film “Birth of a Nation” in the White House. He was an unreconstructed Southern bigot.

But his ideas about foreign policy remain as vital as ever. Democracies are inherently more stable than autocracies or totalitarian regimes. It is critical, as we have seen with NATO, for the democracies of the world to band together to fight authoritarian regimes that threaten and practice war without the informed consent of their citizens.

Obviously, there is fair criticism to be made of U. S. wars in Vietnam, Afghanistan, and Iraq, but the lawlessness of the Russia invasion of Ukraine, the crimes against humanity, and the threat of nuclear war demonstrate a century after Woodrow Wilson was Commander-in-Chief that his views on democracy, self-determination, and the consent of the governed represent the only sustainable solutions for governments that will ultimately guarantee a peaceful world.